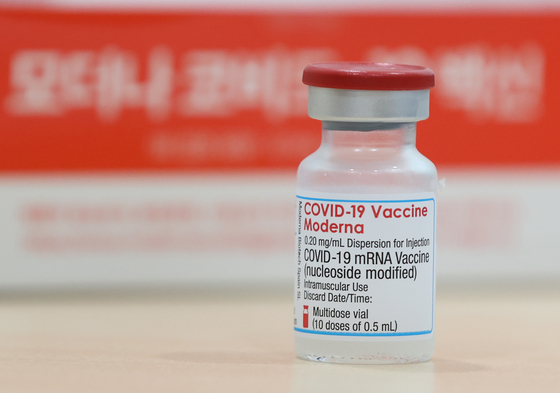 A vial of the Moderna Covid-19 vaccine. [YONHAP]

Some shots will be delayed and patients expecting to get one kind of vaccine might get another.

"According to Moderna, the supply schedule for late July has been changed to August,” Korea’s vaccination task force said Tuesday. Moderna alerted health authorities on July 23 of an unidentified “production issue” involving its Covid-19 vaccine.

The company didn’t specify details about the amounts or whether they can send any in July.

“The manufacturing process for the Moderna vaccine currently shipped to Korea is done by the Swiss contract drugmaker Lonza, and the bottling work is done by the Spain-based company Rovi,” Jung Eun-young, head of the vaccine introduction task force, said during a briefing Tuesday.

“The manufacturing issue does not only affect Korea, but also affects countries that receive the vaccines manufactured from the same plant,” Jung added.

The task force stressed that a supply scheduled to arrive in August will arrive as planned, as its manufacturer is different from the July supply.

Moderna is the main vaccine to be administered in the third quarter in Korea, along with the other mRNA vaccine, which is made by Pfizer.

The government initially said a total of 10 million doses of the four vaccines being administered in the country — AstraZeneca, Pfizer, Moderna, and Janssen — will arrive in the country in July.

Only 6,302,000 doses of AstraZeneca, Pfizer and Moderna have been delivered so far.

A batch of 2,679,000 Pfizer vaccines under a direct contract with the pharmaceutical company will arrive Tuesday, and 101,000 Janssen doses are set to be delivered Thursday — bringing the total to only 9.08 million.

The production issues among Moderna's European manufacturers led to an abrupt revision of Korea's inoculation plan.

However, they earlier switched the vaccine type to Pfizer for people in Seoul, Gyeonggi and Incheon who are to receive vaccines until July 30.

Then on Monday, they announced all people in their 50s who are getting the vaccine in the first week of August will get Pfizer shots, regardless of their region.

A total of 657 medical clinics across the country that are stocked only with Moderna shots will give Moderna vaccines to the people booked at their clinic.

The delayed supplies of Moderna shots also affected the in-house vaccination programs at large companies. They were planning to use the Moderna vaccine.

Large Korean corporations such as Samsung Electronics and Hyundai Motor announced last week they will replace Moderna's vaccine with Pfizer's for their inoculation programs.

The government signed a contract with Modena for 40 million vaccines for 20 million people, and only about 1.15 million shots, or 2.9 percent of the total contracted amount, have arrived so far. This month, there was no shipment.

If the vaccines are not supplied on schedule, additional changes are inevitable in the vaccination plan for the second half of the year.

However, the government said Tuesday that 31 million doses will be shipped by the end of August, and that the current vaccination schedule for people in their 50s and people between the ages of 18 and 49 will proceed as planned.

The government will announce Friday its August vaccination plan, including for people in their 40s or younger.

Amid the country’s ever-shifting vaccination efforts, the coronavirus continued to rage, with cases exceeding 1,300 for another day.

Korea added 1,365 new coronavirus cases on Tuesday, including 1,276 local infections, raising the total caseload to 191,531, according to the Korea Disease Control and Prevention Agency (KDCA).

Two more people died from Covid-19, bringing the total number of fatalities to 2,079.

With regions outside the capital region becoming the new epicenters of virus cases, starting Tuesday they were all put under Level 3 — the second-highest of the four-tier distancing system — and some under the highest Level 4.

From Friday, all department stores and large discount stores in areas under Level 3 or higher are required to keep QR-code or handwritten entry logs at their entrances.

Recent clusters of infections in department stores has raised the need to strengthen the management of entry lists for epidemiological investigation purposes, as visitors could enter without having to register with a QR-code or on an entry log, as in movie theaters and many restaurants.

"There were practical difficulties [to require entry logs] as there are many entrances, and the long queue of the entry registration could increase the risk of infection,” Sohn Young-rae, a senior health official said Tuesday.

"We will minimize the dense environment of waiting lines by adopting the visitor access control system based on QR-codes, mobile phone calls, and hand-written entry lists."