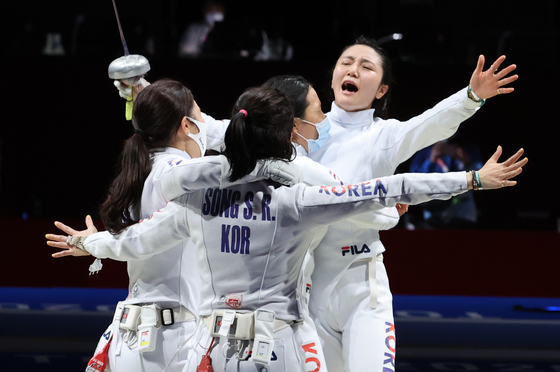 The Korean national women’s epee team celebrates after winning 38-29 against China in the semifinals on Tuesday at the Makuhari Messe Hall in Tokyo. The team won silver in the event. [JOINT PRESS CORPS]

World No. 4 Korea had some serious history to live up to against No. 6 Estonia in the finals, having lost to the northern European country in the quarterfinals of the 2016 Rio Olympics.

Unfortunately for Korea, the northern European side proved unstoppable once again.

The two countries opened the scoring together with a double hit.

Throughout the match the two exchanged brief leads, as the score leveled several times in the second bout and the fifth bout.

In the seventh bout, both countries pulled out their fourth alternate fencers, Lee for Korea and Irina Embrich for Estonia. The two finished the bout leveled again at 24-24.

Song came on the piste to hand a 26-26 tied game over to Choi who couldn't stop an onslaught from Estonia's Katrina Lehis. 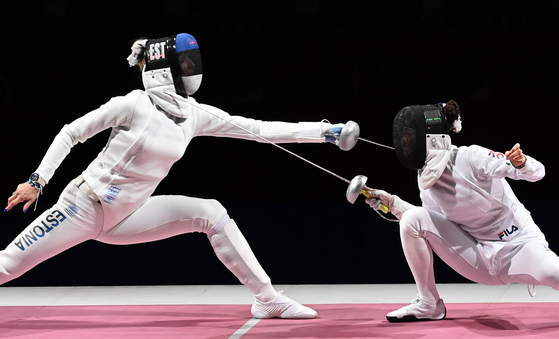 
The medal comes as some much-needed redemption for Choi, Kang and Song, all four of whom dropped out of the individual event, Choi and Kang in the round 32 and Song in the round of 16.

For the épée team events, one team has three players and one alternate player. If the team substitutes a starting fencer with the fourth member, the original member cannot rejoin the game even in the next match.

The three fencers from each team fence each other once, thus one fencer has three bouts to play. Both teams are not aware of the order their opponent will be playing in, and the match is designed so that no two fencers compete each other twice and the order cannot be altered.

There are nine bouts of three minutes, with the scores of each bout carrying over. Each bout has a maximum score, the first is five, second ten and third 15 and so on. If the first bout of three minutes ends at 3-0, the winning team's fencer can score up to seven more points whereas the opponent can score up to 10 points in the next bout, with first team to reach 45 points taking winning the match.

But in épée matches, it rarely reaches that full score, rather, the winner is decided by whoever has higher points at the end of the ninth bout after the full 27 minutes have run out because épée is more defensive and takes more time to score as opposed to sabre and fleuret events.

In case of a tie at the end of the ninth bout, the two fencers on the piste will fight for the one last point to finish the entire match. 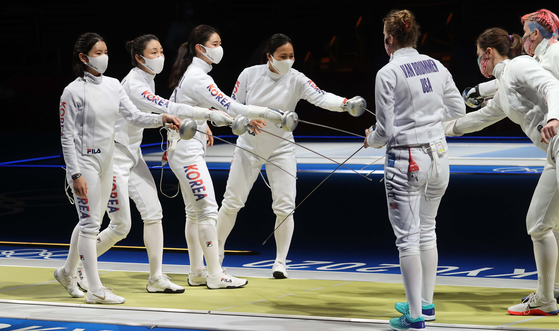 The Korean national women’s epee team salutes the United States team before the quarterfinals on Tuesday at the Makuhari Messe Hall in Tokyo. [JOINT PRESS CORPS]


En route to the final, world No. 4 Team Korea had to fight No. 5 United States in the quarterfinals, then No. 1 China in the semifinals.

The United States opened the scoring and took a two-point lead at the end of the second bout, but Song leveled the score at 9-9 on the third bout and on top of that, Choi added six points, outscoring the opponent by three points.

Clasping a three-point lead toward the beginning of the match was what did the trick, because in épée, there are double-hits that give both teams points, making a comeback much harder than the other two disciplines.

The bigger challenge came in the semifinals, where Korea had to face the No. 1 Chinese team of world No. 3 Sun Yi-wen, No. 5 Lin Sheng and No. 15 Zhu Ming-ye.

Korea allowed China to lead the first bout by a point, but Choi outscored the Chinese team, adding five points against their strongest fencer Sun.

Towards the end of the bout, Sun called a five-minute medical time out which first seemed like an attempt to bring the tide back on their side.

But as the fourth alternate member, Xu An-qi appeared on the piste instead of Sun, it was evident that an injury was going to put Sun out of the rest of the Games.

With the highest-ranked fencer out, Korea managed to keep at least a safe one-point lead until the very end of the match.

Korea have previously won one medal in the event, with Shin A-lam, Jung Hyo-jung, Choi Eun-sook and Choi In-jeong taking silver at the 2012 London Games.