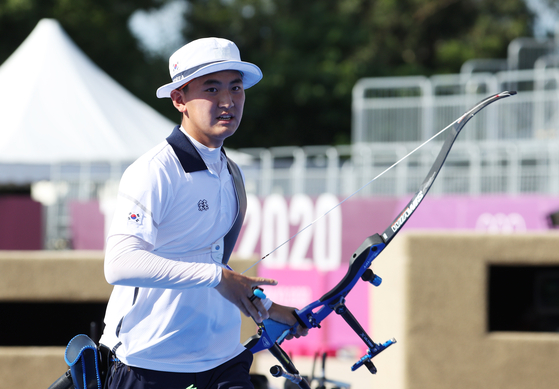 
Kim Je-deok's attempt to become the first archer ever to win three gold medals at a single Olympics came crashing down on Tuesday when he was beaten in the men's individual round of 16 by Florian Unruh of Germany.

The ebullient 17-year-old was one of two Koreans chasing the first three-gold sweep in Olympic archery history, alongside female archer An San. The duo on Saturday won the inaugural mixed archery event, following it up with successive wins in the women's team event and men's team event on Sunday and Monday.

Had Kim gone on to win the men's individual final as well, he would have taken home three gold medals at the first Olympics where such a thing is possible. An still has a chance to take that honor if she can come through in the women's individual competition.

Kim started the round of 16 contest with three straight 10s, looking like he might dominate the competition like he had all earlier match-ups. Kim slipped in the second, third and fourth set, shooting an eight in each one, before rallying in the fifth set, but by then the damage was done.

Kim was only able to win the first set and tie the second, losing the third, fourth and fifth by a single point each time.

Kim Woo-jin will begin his first round of the men's individual tournament on Wednesday, while Oh Jin-hyek begins Thursday.