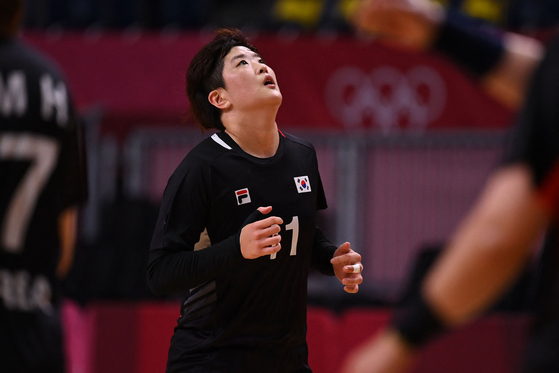 Right back Ryu Eun-hee reacts after missing a goal opportunity during the women's preliminary round group A handball match against the Netherlands, on Tuesday. [AFP/YONHAP]


The Korean women's handball team were handed their second loss at the 2020 Tokyo Olympics by the Netherlands at Yoyogi National Stadium, western Tokyo, on Tuesday afternoon.


The 43-36 scoreline, however, did leave more room for optimism compared to the team's earlier loss on the 25th, in which Norway ended up winning by a twelve-goal margin (39-27).

Head coach Kang Jae-won offered in a press conference prior to the tournament that going at least 1-1 over the first two matches of the Games would be key to securing favorable quarterfinals seeding.

Such plans were unfortunately not realized, although the team could still very well advance to the quarterfinals, as placing fourth in their six-team group is enough for qualification.

While things may look grim, these results were somewhat to be expected. Korea may be the only non-European country in women's handball to have ever won the Olympics, but that glory is largely bygone, while both Norway and the Netherlands currently rank among the world's best.

Dropping games in the preliminary round against teams considered among the tournament favorites should not be reason to lose all hope early on.