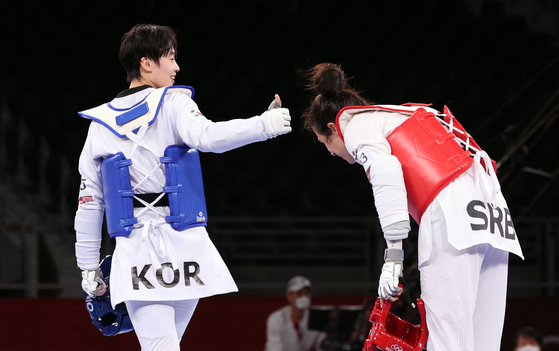 
Lee Da-bin will leave her first-ever Olympics with a silver medal in hand.

Mandic established a big early lead in the first round, landing a kick each to Lee's head and torso to go up 5-0. Lee rallied well in the second round, landing a torso kick of her own and closing the gap to 6-3.

Lee came within a hairsbreadth of turning the tide in the third round, landing a punch and a kick to Mandic's torso to tie it up 6-6 with 40 seconds to go, but Mandic almost immediately responded in kind to restore her three-point lead and eventually secured her victory.

Earlier in the day, Lee made national news by landing a buzzer beater of a kick onto her opponent in the very final second of her semifinal match for a thrilling 25-24 comeback win. That she pulled it off against Great Britain's Bianca Walkden, ranked No.1 in the world in the +67kg category, had added to the drama.

With all Taekwondo events now completed at the 2020 Tokyo Olympics,  Lee was the only Korean Taekwondo athlete to make it to a gold medal match.