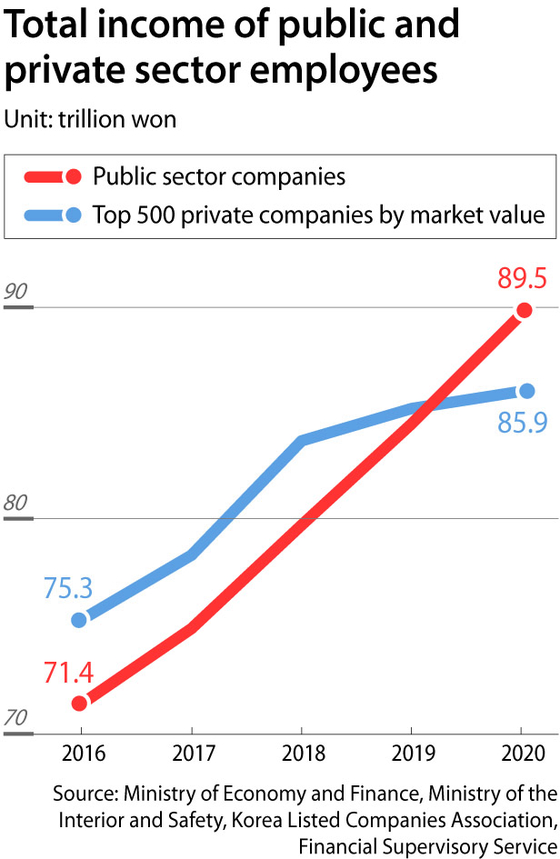 Salaries paid to public sector employees surpassed those paid by Korea’s top 500 listed companies, a stark illustration of the bloating of the state.

Public sector employees were paid a total of 89.5 trillion won ($77.4 billion) last year, up 6 percent on year, according to data from the Ministry of Economy and Finance and Ministry of the Interior and Safety compiled by Rep. Song Eon-seong, an independent lawmaker. The public sector includes all civil servants and public institution employees.

According to the Korea Listed Companies Association and Financial Supervisory Service, people working at the top 500 listed companies — ranked by market capitalization — were paid a total of 85.9 trillion won last year, up 0.94 percent on year.

From 2017, the start of the Moon Jae-in administration, to 2020, public sector salaries in aggregate rose 25.4 percent, compared to the private sectors' 14.1 percent rise.

The hiring of more people by the public sector is considered the main factor.

Creating 810,000 jobs in the public sector was one of Moon’s core election campaign pledges. Moon’s plan consisted of adding 174,000 entry-level civil servants in the safety sector — firefighters, police, and civil servants in the security sector — 340,000 in the social welfare sector and upgrading 300,000 contract workers to the permanent payroll.

The number of civil servants stood at 1.22 million as of the end of last year, according to National Pension Service data. That means 113,350 more civil servants were employed during Moon's term, which is a 10.2 percent increase.

With Moon having only one more year left in his presidency, many expect the numbers to rise further.

Unsurprisingly, young job seekers are increasingly considering public sector jobs. According to Statistics Korea, 32.4 percent of 850,900 job seekers as of May were preparing to apply for the civil service or get a job at a public institution, up 4.1 percentage points from last year.

“The working population is decreasing, and we’re adding hundreds of thousands of people to the public sector,” said Hyun Jeong-taek, chairman of the Jungseok-Inha School's Foundation and former chair of the Korea Development Institute. “Policies pushing young talent, who could be working at innovative information and technology sectors, into public jobs is an inefficient way of distributing labor.”

According to the National Assembly Budget Office, if Moon recruits 174,000 ninth-level civil servants as he pledged by the time his term finishes, an additional 327.8 trillion won would be needed to pay them over the next 30 years. The Korea Taxpayers Association expects more: 419.3 trillion won. Neither estimate includes pensions.

“Costs in the public sector will continue to rise, and the financial burden on our children and great-great grandchildren will grow,” said Rep. Song. “We need to cut down on public sector jobs to increase efficiency, and map out plans to manage them reasonably.”