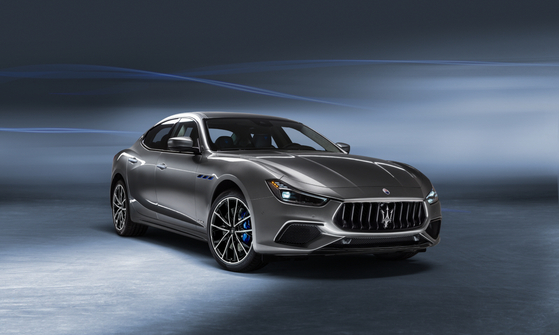 
Maserati's Ghibli Hybrid launched in Korea on Wednesday in its first foray into the country's burgeoning eco-friendly car market.

It is equipped with a 2.0-liter four-cylinder turbocharged petrol engine and a 48-volt battery. The battery supports the internal combustion engine when a higher amount of power is needed, such as during acceleration.

It takes 5.7 seconds to reach 100 kilometers (62 miles) per hour, and its fuel efficiency stands at 8.9 kilometers per liter.

Catering to sports car fans, the Ghibli Hybrid comes with an extra sound resonator to maximize the engine growling sound that was jeopardized due to the hybrid system.

Blue details were added to the exterior on the front fender's air vent, C-pillar and the brake caliper. The hybrid model also has its exclusive color, Grigio Evoluzione, which is a grayish color with a blue overtone.

Hyundai to produce new Tucson in U.S. plant next year