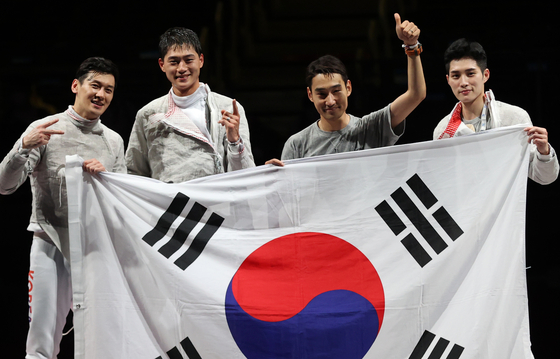 The Korean men’s sabre team celebrates after beating Italy in the gold medal match on Wednesday at the Makuhari Messe Hall in Chiba, Japan. With the gold, Korea successfully defended the men’s team sabre title it has held since the London 2012 Olympics. [YONHAP]


The Korean men's sabre team beat Italy on Wednesday to take the gold medal at the Makuhari Messe Hall in Chiba, Japan, defending their title from the 2012 London Games.

Gu Bon-gil and Kim Jung-hwan, both members of the reigning champion 2012 team, were joined by Oh Sang-uk in Tokyo, with Kim Jun-ho as the alternate.

The Korean sabre team is the world No. 4, above Italy at No. 7, but the European country is undoubtedly a fencing powerhouse, with four Olympic gold and 11 silver medals in the event. Italy also tops the all-time fencing medal table with 38 gold medals in men's events and 11 in women's events.

The only medal Korea has ever won in the event was that 2012 gold. As the men's team sabre was not included in the 2016 Rio Games, Team Korea came to Tokyo as the reigning champion in the event. 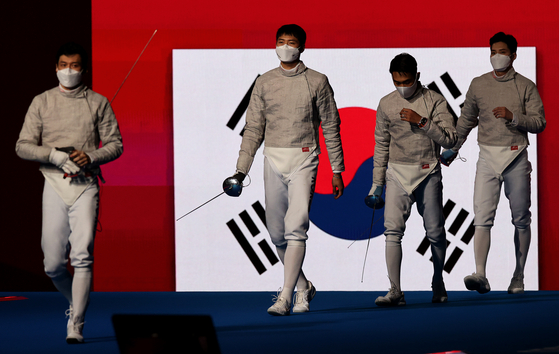 
The Italian team consisted of Luca Curatoli, Enrico Berre and Aldo Montano. Samele Luigi, the strongest player on the team, sat out the final.

Kim Jung-hwan opened the scoring against Curatoli with the full five points, handing over to Oh with a one point lead.

Oh was able to make the most of that lead, scoring five consecutive points against Montano to the full 10 without conceding any. After that, it was just a case of holding on until the end of the match. 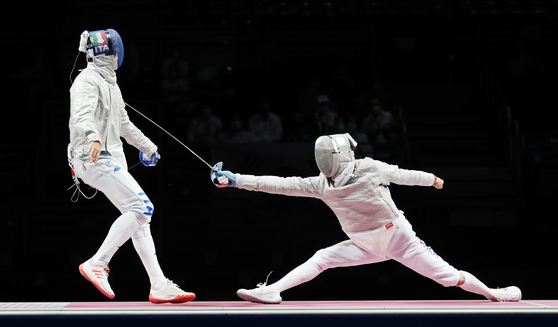 
All three fencers were well-paced in their attacks and showed ambition when creating scoring opportunities, scoring the full points in each bout to finish long before the three minute limit. The entire match ended with Korea up 45-26, a decisive title defense to earn another gold medal.

For hall of famers world No. 7 Kim Jung-hwan and No. 10 Gu, the men's team final was another high point in two storied careers.

For world No. 1 Oh, this marks his very first Olympic medal.

The gold medal offers some redemption to Oh, who dropped out of the individual quarterfinals after losing to Georgian sabrist Sandro Bazadze and Gu, who once maintained the top spot in the world ranking for three seasons, having crashed out of his first game in the round of 32.

For Oh, who was hospitalized after testing positive for Covid-19 in March, the comeback is even more important. 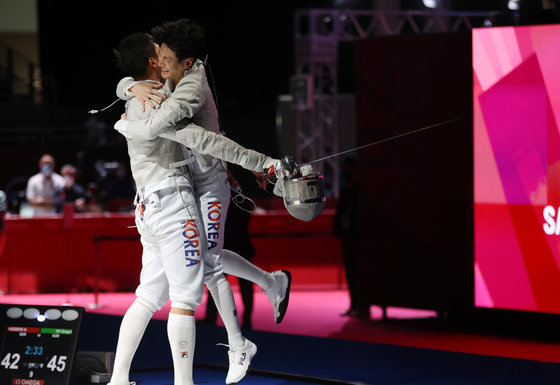 Korean sabrist Oh Sang-uk, left and Gu Bon-gil celebrate the men’s sabre team's win against Germany in the semifinals on Wednesday at the Makuhari Messe Hall in Chiba, Japan. [YONHAP]


En route to the finals, Korea put up a good fight against Egypt and Germany.

In the first match, Korea faced Egypt in the quarterfinal, holding on to a two-point lead throughout the match to finish up 45-39 in 42 minutes and 18 seconds.

Korea was looking at a much harder match in the semifinal, against Germany. Germany started outscoring Korea from the start and the score difference widened at one point to 15-11. Gu's nine points against Benedikt Wagner pulled Korea back into the game, taking a two-point lead and seizing the momentum. Once Korea had the lead, they didn't let go.

In the sixth bout, Matyas Szabo scored nine points against Kim Jung-hwan, but Gu got back on the piste to widen the gap once again with Oh's last five points locking in Korea's ticket to the finals.

This medal marks Korea's fourth gold medal and first gold in fencing at the Tokyo Olympics.