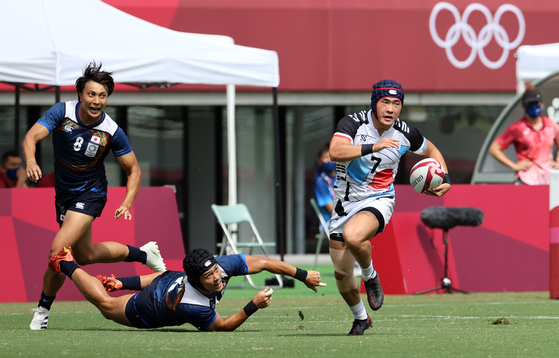 Korea's Jang Jeong-min runs with the ball during a rugby sevens game against Japan at the 2020 Tokyo Olympics on Wednesday. [YONHAP]


The Korean rugby sevens team ended their Olympic journey in 12th place on Wednesday after an unfortunate final game against Japan that could have gone either way.


Korea put up a valiant fight in the 11-12 placing game against Japan, falling foul of some questionable sin bin decisions that took the wind out of the team's sales in the second half. Korea fought on, finishing the game with the score at 31-19 to Japan, with the majority of Korea's tries coming in the first half.

Even in this game, Korea entered as a serious underdog. That Japan is a rugby-playing nation is often overlooked, and pundits make the mistake of thinking a game like this should be Korea's to win.

In reality, Japan are a very competitive rugby nation, regularly appearing in the 14-man Rugby World Cup, and even hosting it in 2019. In rugby sevens, Japan have competed at all seven Rugby World Cup Sevens, while Korea have failed to qualify for the last three. At the Asian Games, Japan has three gold medals to Korea's two, but Japan's most recent was in 2014 and Korea's in 2002.

Earlier in the tournament Korea dropped games to New Zealand, 50-5, Australia, 42-5, Argentina, 56-0, and Ireland, 31-0. Those numbers may look unimpressive, but the combined 29 points Korea scored in the tournament against some very tough opposition still surpassed many people's expectations. Korea's Olympic debut wasn't the complete shutout it should have been, and the team can head home with their heads held high.