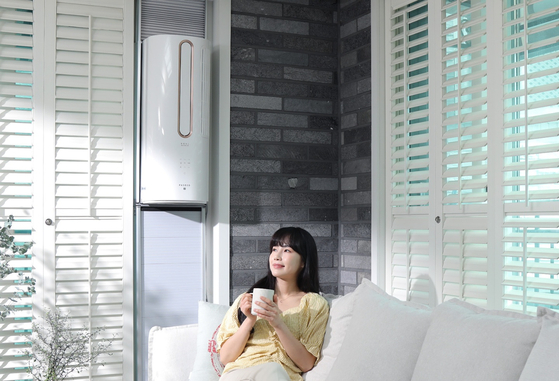 
Window-type air conditioners were shunned for years in Korea. Abandoned by the big manufacturers more than a decade ago, the relics could be found mainly in dingy second-hand shops and jury-rigged to cool cheap motels.

For a number of reasons — regulation, technology, pandemic and weather-related — the once ungainly boxes, now upgraded for style and efficiency, are back in fashion, and the market for them is booming.

A 39-year-old living in Gwangju, Gyeonggi, recently bought a window air conditioner for his first grade child. His kid stays home all day to take online classes due to the pandemic, and the family decided that an extra cooling device was needed in the child’s room.

Due to regulations, external air conditioning units are verboten at apartments and houses built after 2006, and a window-mounted types are often the only option.

“Our whole family began to spend more time at home due to Covid-19, so it was a necessary purchase,” he said. “It’s expensive as it costs over 700,000 won ($611), but it only took me 30 minutes to install. After trying it, I think the window air conditioner performs beyond my expectations.” 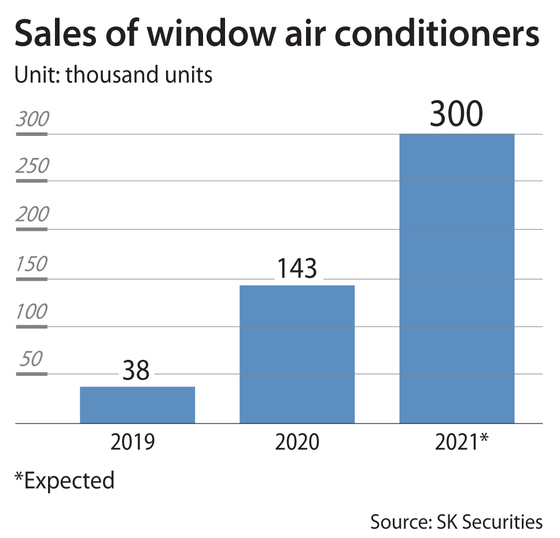 The number of air conditioners of all types sold in Korea dropped 20 percent to 2 million units last year due to the record-long rain season, and this year’s sales are forecast to be flat to slightly up.

Big name companies such as Samsung and LG Electronics are rushing to release window air conditioners. 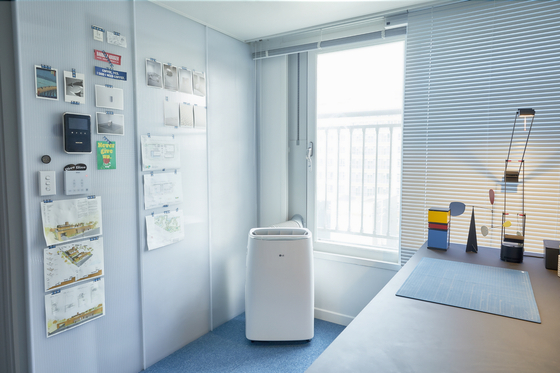 
Both were significant players in the market, with Lucky Goldstar — the former name of LG Electronics — in 1968 being the first Korean company to release a window-mounted air conditioner.

Window-types initially sold well, but they were discontinued by LG Electronics in 2006 and Samsung Electronics in 2012 as tower air conditioners and ceiling-types gained popularity for being less noisy, cooling faster and being more luxurious. Products with outdoor components tend to be quieter.

The unsold window air conditioners and those from secondhand stores were used at cheap motels, making Koreans shun them even more.

After the companies exited, window-types were hard to find until small firms such as Paseco, Shinil Electronics and Winia Dimchae revived the market in 2019.

Samsung Electronics returned to the market this April, releasing the Window Fit.

“Window air conditioners have a built-in external unit, allowing them to be easily installed without having to damage or alter the window sill,” said a spokesperson for Samsung Electronics. “We aim to satisfy the demands of consumers who want to have one air conditioner per room, a growing need as they begin to spend more time at home due to online classes and working at home.”

LG Electronics focused on portable air conditioners and released theirs last May. Being too loud was one of their weaknesses, but companies have upgraded their products to reduce noise.

“Our third generation-model reduces noise by 38 percent, running at 37.1 decibels (dB) on sleep mode,” said a spokesperson for Paseco.

An LG Electronics portable-type is advertised to run at 40 dB and a model from Samsung Electronics at 37 dB; 40 dB is as loud as a quiet library.

Although both portable and window air conditioners were considered niche products, some expect them to go mainstream in Korea.

“There is a big chance it can grow into a mass market — new products addressed existing problems such as low energy efficiency, meeting the standards of regular air conditioners, and there is rising demand to have cooling devices in every room of the house,” said Lee Byung-hwa, a KB Securities analyst. “The market can grow like it did for kimchi refrigerators and dehumidifiers, but it might be difficult to generate high profits since competition among companies is growing intense.”