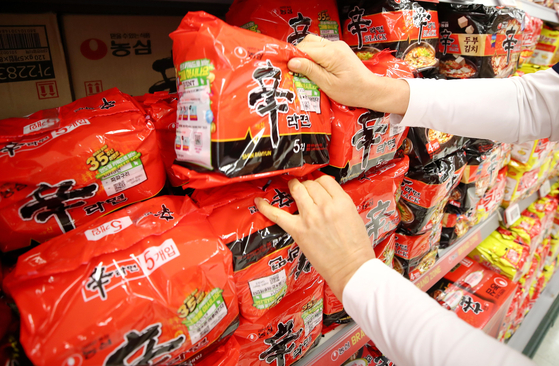 Packs of Nongshim's Shin Ramyun and Shin Ramyun Black are displayed at a discount mart in Seoul. [YONHAP]


Nongshim will raise the prices of its ramyeon products by 6.8 percent on average starting Aug. 16, the first time since 2016.

After the price change is applied, a single pack of Shin Ramyun will be sold for 736 won (64 cents) at factory price, up 7.6 percent. The company announced that prices may slightly vary by retailer.

The price of Nongshim's Ansungtangmyun will rise by 6.1 percent, and that of Yukejang will increase by 4.4 percent.

According to Nongshim, the price increase was an inevitable decision due to a rise in the cost of raw materials including palm oil and flour.

The last time Nongshim upped their prices was in December 2016, increasing their overall ramyeon product prices by an average 5.5 percent.

“Since ramyeon is deeply integrated into the Korean diet, we only adjusted the price by minimal levels,” said a spokesperson for Nongshim. “We will continue to give back to our customers, providing products with better taste and quality.”

Ottogi recently announced they will raise their ramyeon prices from Aug. 1, the first time in over a decade. With both Ottogi and Nongshim upping their prices, many expect the prices of other ramyeon makers such as Samyang Foods and Paldo to follow suit.

After the price rise was announced Thursday, stock prices of Nongshim went up as many expected the company to improve profit. Nongshim’s shares gained 1.09 percent to close at 326,000 won.

Ramyeon takes on the world, some boomeranging back to Korea

Ramyeon on the rise