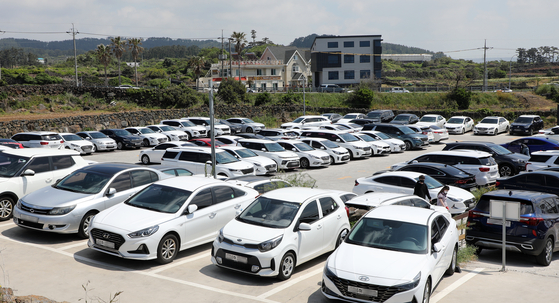 The parking lot at Handam Beach, Jeju Island, is filled with cars. [NEWS1]


Jeju Island has become an increasingly popular vacation destination leading to a surge in demand for rental cars, which in turn has led to a hike in prices and as well as a shortage of vehicles.

Many have filed complaints to Jeju's government office such as; “I had to give up my vacation to Jeju because of the [surging] rental car fees,” or “Can you adjust the fees that have increased so much recently?” Similar criticism can be found on online blogs and social media.

Are the rental companies trying to take advantage of the influx of visitors to Jeju?

Surprisingly, if you take a look at the overall numbers, there are actually less people visiting Jeju Island than before the pandemic. In the first half of this year, there were 5.48 million visitors to Jeju, a decrease from the 7.33 million in the first half of 2019.

Therefore the hike in rental car prices isn’t due to the number of visitors to Jeju but rather, a change in travel behaviors.

In early 2019, some 78 percent visitors to the island were in individual travelers, while this year, the number of people traveling solo increased to 96 percent. Different from group package travelers that travel together on buses around the island, these individual travelers reserve their own passenger cars. Large vans are not in high demand because no more than four people can gather together and travel due to the region’s social distancing measures. Almost all travelers to Jeju are on the hunt for a passenger car.

Another factor that may have contributed to the surge in prices and demand is the decreased number of rental cars on the island. From September 2018, the Jeju government started to control the number of cars available to rent, which saw the number of vehicles drop from 32,000 to 30,000.

Prices are also dependent on what time of year you're looking to rent. During the off season, it is possible to find cars for as little as 5,000 won a day, but during the high season, discounts are rarely applied.

Rental car companies must notify relevant authorities of the prices they are changing and are not allowed to exceed those prices. 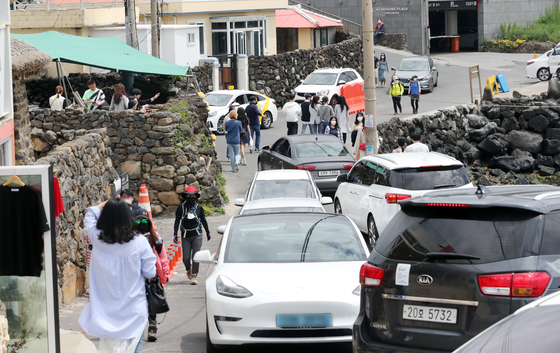 The Jeju government said there have been no cases this year of a rental car company charging more than the prices that they previously the authorities of.

Because of prices and demand, some are bringing their own vehicles on vacation.

While it may take more time than flying, it could actually be more cost effective. Depending on the size of your car, the cost of shipping yourvehicle from either Mokpo or Busan to Jeju range from 80,000 won to 200,000 won. Ferry tickets for passengers are priced between 20,000 won to 40,000 won.

Door-to-door services are also available where someone will pick up your vehicle from your home, take it on the ferry, and meet you at Jeju airport. Using this service one-way costs between 250,000 won to 350,000 won which can work out as a more economical option for those planning longer stays on the island. Another advantage of such service is that you can easily pack larger items such as strollers and car seats.

If you want to forget the stress of driving all together, you can opt to use public transportation on the island, but be prepared to wait.

Another option are travel taxis which can be reserved for a full day. Prices range between 50,000 won to 150,000 won depending on how many hours you reserve.

Socar to weather the storm and push ahead with IPO