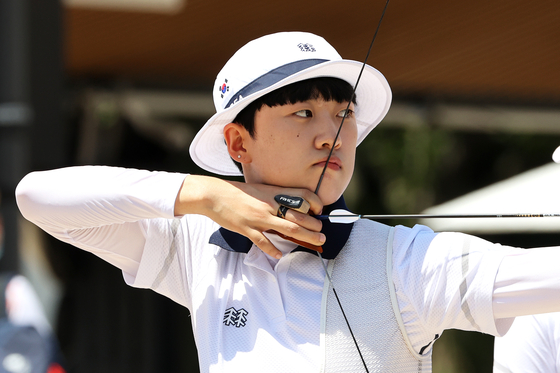 
Korean national team archer An San won two gold medals for Team Korea at the 2020 Tokyo Olympics, but rather than being lauded for her achievement, the 20-year-old female archer is being criticized for the length of her hair.

An was initially praised after winning the mixed team event on Saturday and the women's team event on Sunday, but online opinions drastically changed around Monday when a post on a predominantly male online community gained traction.

The post titled "Women who attend women's universities and have a short cut are 90 percent likely to be feminist" labeled An a feminist, something which the members of the group frown upon. In Korea, "short cut" refers to short, conventionally masculine hairstyles, usually when worn by women. 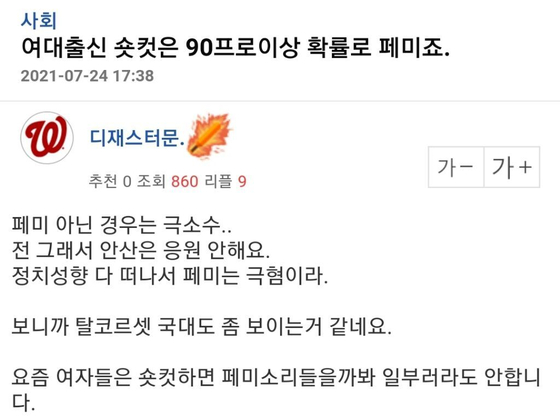 A post titled “Women who attend women’s universities and have a short cut are 90 percent likely to be feminist” on a predominantly male online community claimed An must be a feminist because of how she wears her hair. [SCREEN CAPTURE]


The post claims that An is a feminist because she attends Gwangju Women's University and wears her hair short.

"That's why I don't support her," the post reads. "I extremely hate feminists [...] Women nowadays intentionally don't have short cuts because they don't want to be called feminists."

This is not the first time An's hairstyle has been commented on. In March, she uploaded a video of her practicing on Instagram. When a commenter asked why she cut her hair short, with an emoji of a sad face, the archer responded "Because it's more comfortable." 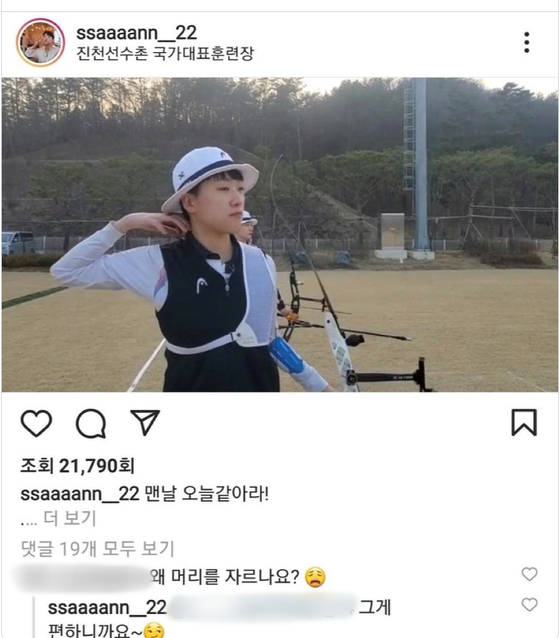 In March, an online commenter asked An why she wears her hair short, to which the archer replied “Because that’s more comfortable.” [SCREEN CAPTURE]


"Long hair is a visual symbol of a woman's conventional femininity," said Ryu Hyeong-rim, a gender equality activist at civic group Womenlink. "So when a woman wears her hair short, she is perceived by some as 'violating' society's idea of what a woman should look like."

This time, An clapped back harder at hate messages.

"While you're sending messages in your room driven by your inferiority complex, I'm winning two gold medals at the Olympics," she wrote on Instagram, with a screenshot of a user relentlessly sending her insults.

People have been requesting the Korea Archery Association to protect An from hate comments and take a strong stance against those posting them. Over 300 requests have been posted on the association's website as of Thursday morning.

The harassment of An also sparked debates online about why short hairstyles on women cause such responses from certain groups of society.

"Would they ask male athletes if they're feminist because they have short hair too?" read several comments. 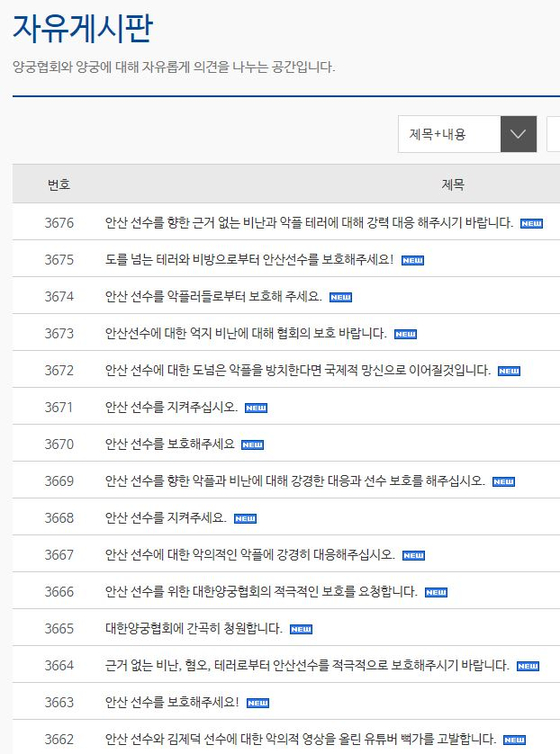 As of Thursday morning, over 300 requests have been posted on the Korea Archery Association’s website to protect An from hate comments and not force her to apologize for anything. [SCREEN CAPTURE]


"I find this 'controversy' absurd," Ryu said. "The notion that you can distinguish someone's personal beliefs or ideology based on hair length is irrational. The bigger problem is that this distinguishing leads to hateful verbal attacks toward someone who is deemed a feminist. There are plenty of similar instances in real life separate from An's case.

"The fact that someone potentially being a feminist is a 'controversy' in Korean society is also disturbing, which is why I believe the Korea Archery Association should not give in and apologize for anything."

"I cut my hair short two years ago because I wanted a fresh new start after a breakup," she said. "I kept my hair that way ever since, because it cut my time in the shower by half."

One day, Shin was entering her university's library to study for an exam when she was confronted by a male student.

"A male student that I did not know grabbed me by the wrist and asked, 'Are you a feminist?' Remember, I only cut my hair because of a breakup, so I didn't know what he was talking about and just told him to leave me alone. It hit me later why he may have said that." 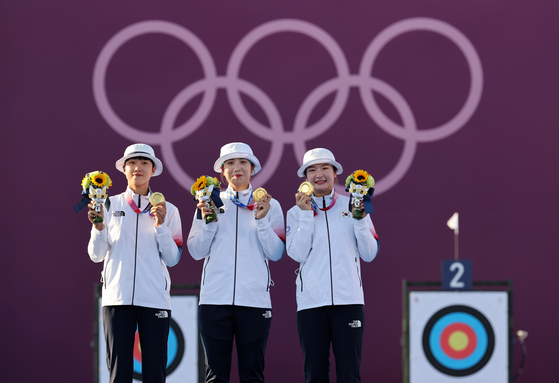 Archers An, Jang Min-hee and Kang Chae-young of the Korean women’s archery team pose after winning a gold medal for women’s team at the 2020 Tokyo Olympics on July 25. [JOINT PRESS CORPS]


Shin added that she feels concerned about black-and-white views on feminism and this online outrage.

"People can do whatever they want with their own hair," she said. "I don't know or care why An wears her hair short. Her job as an athlete is to get medals for Team Korea, which she did. That's all that matters."