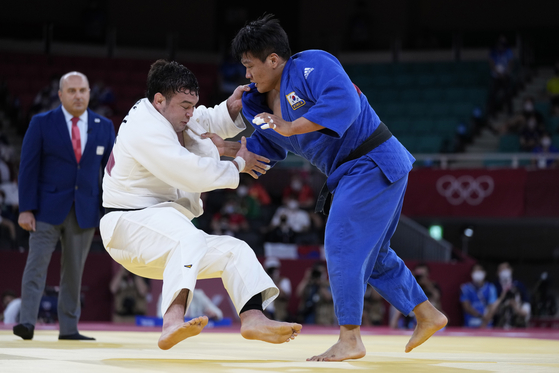 Cho Gu-ham, right, competes against Aaron Wolf of Japan in the men’s 100 kilogram judo final at Nippon Budokan in Tokyo on Thursday. [AP/YONHAP]


Korea judoka Cho Gu-ham took silver in the men’s 100 kilogram, losing a grueling fight to Aaron Wolf of Japan at Nippon Budokan in Tokyo on Thursday.

It took 9 minutes and 35 seconds of golden score time for Cho and Wolf to settle the score, the longest judo match of the Tokyo Olympics so far. Both judokas picked up two penalties in normal time, but were so evenly matched that for over 10 minutes of fighting, neither could break through.

Ultimately it was an ippon from Wolf that won the day, taking Cho down to end the war of attrition as the two visibly exhausted judokas struggled to find the strength to break through.

Cho took down world No. 2 Jorge Fonseca of Portugal in the semifinal, edging him out with a single Waza-Ari in a fairly closely matched fight. Cho emerged victorious to reach the final while Fonseca went on to claim bronze, beating Shady Elnahas of Canada in the bronze medal match.

Korea’s Yoon Hyun-ji also came very close to medaling in the women’s 78 kilogram, fighting all the way to the bronze medal game where she lost out to Mayra Aguiar of Brazil.

After an impressive day on the mat, Yoon’s path to the gold medal game was blocked by world No. 1 Madeleine Malonga of France.

Yoon, ranked No. 23 in the world going into the Games, defied the odds to get as far as she did, beating world No. 5 Guusje Steenhuis of the Netherlands and world No. 7 Natalie Powell of Great Britain earlier in the day.

Korea headed to Tokyo hoping to beat Japan at its own game in judo. Wolf may have taken the gold medal for Japan on Thursday, but that the world No. 6 made it so far is plenty of reason to be proud.

Korea will continue its judo medal hunt on Friday, when Han Mi-jin tries her luck in the women’s plus 78 kilogram and Kim Min-jong contests the men’s plus 100 kilograms. Both face a tough fight — Han is the world No. 20 and Kim is the world No. 14.