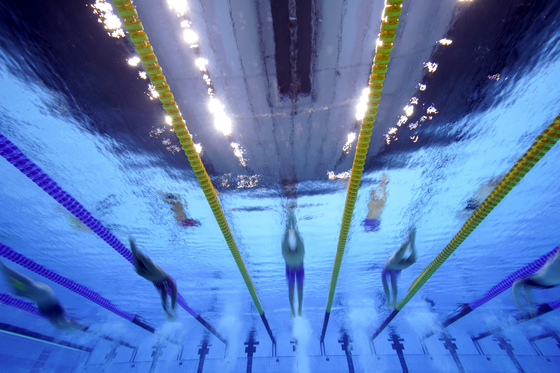 Swimmers compete in a men's 200-meter backstroke heat at the 2020 Summer Olympics on Wednesday evening. [AP/YONHAP]

Lee finished second in the second heat on Wednesday evening with a time of 1:56.77, beating his own record of 1:57.06 set at the national team selection event last year. Lee finished 2.14 seconds behind Luke Greenbank of Great Britain.

Lee's was the second Korean record to fall on Wednesday. Earlier in the day, Hwang Sun-woo set a new Asian record in the men's 100-meter freestyle, recording a time of 47.56 seconds to become the first-ever Korean to reach the final of the event.