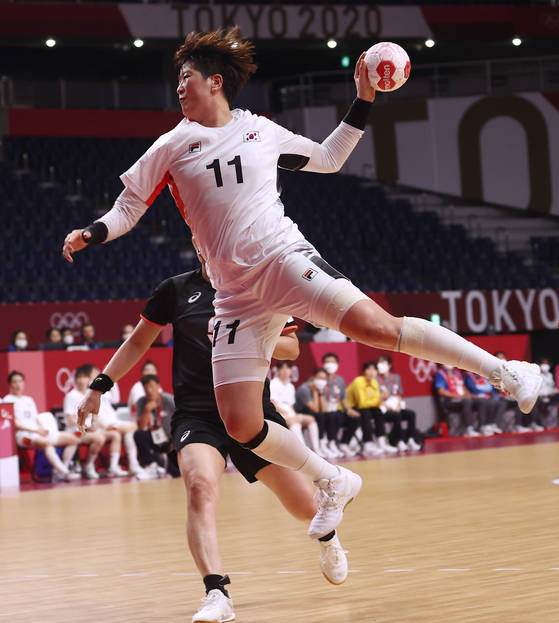 Right back Ryu Eun-hee jumps up to shoot in Korea's preliminary round group A match against Japan. [YONHAP]

It was a nail-biter of a match, with Korea ultimately securing their win with a 27-24 scoreline. Korea were in the lead for the vast majority of the 60 minutes, but Japan were constantly on their heels: Both teams stayed within a five-point margin throughout the entire game.

Ryu Eun-hee's individual brilliance was key to Korea's victory. The right back scored nine out of her 14 shots, with five of them finding the net from nine meters out. Whenever Korea lost steam while attacking, Ryu would fire in a long-range effort to dramatically restore the team's stride.

From Japan's side, goalkeeper Itano Minami put in an impressive performance, saving seven out of the 12 shots she faced and keeping things tense until the final whistle.

A Korea victory was somewhat to be expected, considering the team's lifetime record against Japan, which stands at 24 wins, one draw and 3 losses. The last time Japan beat Korea in women's handball was at the 2010 Asian Games in Guangzhou. The match having been this close may be concerning to some.

Even finishing in fourth in the six-team group stage is enough for quarterfinals qualification, but placement in the preliminaries directly impacts knockout stage seeding. Korea will be desperate to win both of their remaining group stage matches by large margins.