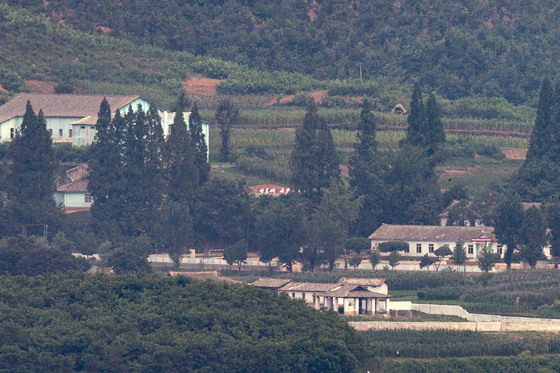 North Korea as seen from the Unification Observatory in Paju, Gyeonggi, on July 28. [YONHAP]


North Korea's economy contracted 4.5 percent in 2020, the steepest fall since 1997, according to the Bank of Korea (BOK) Friday.

According to the central bank, the closing of borders to keep Covid-19 at bay and bad weather were major drivers of the contraction.

The 4.5 percent fall was the steepest since a 6.5 percent fall in 1997, the period of the so-called Arduous March, when North Korea was hit by floods and famine, the central bank said. It also brings the North's GDP to its level in 2003, which was also 31.4 trillion won according to BOK figures.

The closing of borders took a heavy toll on the country's cross-border trade, Choi said.

International trade volume in 2020 -- excluding goods transported between South and North Korea -- plunged by 73.4 percent to $860 million. Trade accounted for only 2.9 percent of the North's GDP last year, according to the central bank.

Cross-border trade had already been declining due to United Nations and other international sanctions. The sanction were intended to cut off North Korea from making hard cash from exports.

The value of goods traded between North and South Korea amounted to $3.9 million in 2020, a 43.5 percent drop. The bank said the value includes general exports and imports as well as economic cooperation and non-commercial transactions.

"Since the shutting of the Kaesong Industrial Complex in 2016, there has been almost no trade between North and South Korea," the BOK said in a statement.

The North's domestic economy also had a bad year.

Production in the agriculture, forestry and fishing sector declined 7.6 percent. The North's authorities restricted fishing to guard against Covid-19, according to the BOK, and heavy rains and typhoons hurt farming.

Mining production contracted 9.6 percent, with some mines being flooded during typhoons.

Manufacturing production decreased by 3.8 percent. Closed borders made it difficult for the country to source inputs for consumer products, the bank said.

Among industries that grew last year were electricity, gas and water production, which grew 1.6 percent. Construction grew 1.3 percent. Water-power generation increased due to the heavy rains, while the boost in construction reflected repairs after the rains and typhoons.

GNI per capita was 1.379 million won, approximately 3.7 percent that of South Korea.

The bank said that North Korean economic indicators related to national accounts such as per capita GNI, are estimated based on South Korea's prices and value-added ratios, and thus should not be directly compared with those of countries other than South Korea.

"We do try to estimate North Korea's GNI based on basic data from relevant institutions like the Statistics Korea and the Unification Ministry but it is hard to determine actual prices within North Korea," Choi said.