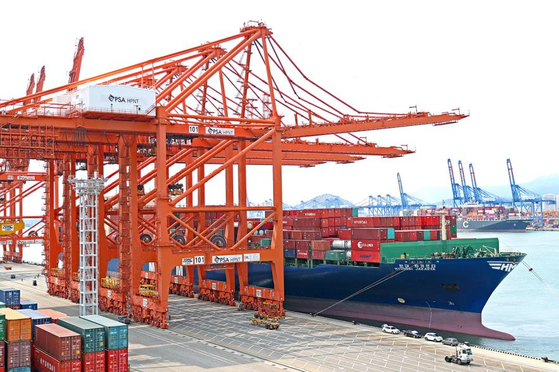 An HMM ship is seen at a terminal in Busan on July 18. [HMM]


One of HMM's main unions is filing for mediation by the National Labor Relations Commission (NLRC) after it failed to agree with management over wages for this year.

The union, which has been asking for a more than 20 percent raise in wages for employees working in offices and other plants, not on ships, plans to file the request later today or on Monday.

It is also threatening a strike if the mediation fails.

The union held four rounds of negotiations before taking the case to the NLRC.

The other main union is scheduled to hold a third round of negotiations with management on Aug. 3.

The unions argue that a 25 percent hike is necessary after wages were frozen from 2012 through 2019.

They demanded an eight percent raise last year, after HMM earnings rose significantly thanks to a surge in shipping demand.

They eventually agreed to a 2.8 percent increase.

“The company’s current stance is that it still has a lot of debt to repay, and is asking employees to take things slow,” said Woo Byeong-seon, a spokesperson for management. “Employees argue they are asking for what they had missed during the eight-year freeze in wages.”