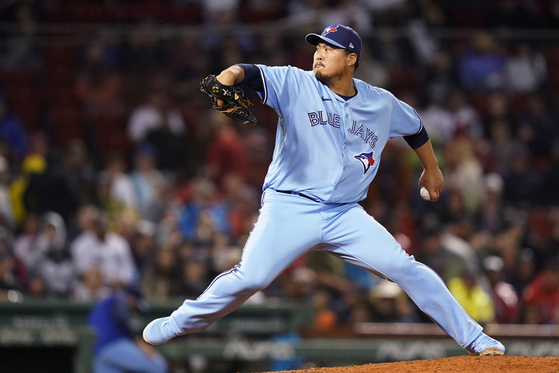 Toronto Blue Jays starting pitcher Ryu Hyun-jin delivers to a Boston Red Sox batter during the fifth inning of a baseball game at Fenway Park in Boston on Thursday. [AP/YONHAP]


Ryu Hyun-jin of the Toronto Blue Jays picked up his 10th win of the season Thursday, throwing six scoreless innings in a blowout 13-1 win over the Boston Red Sox at Fenway Park in Boston.

The big victory came on the very last day of the Blue Jays 669-day exile. From Friday, the Blue Jays will be back in Toronto for the first time since the 2019 season. For some players, Ryu included, it will be the first time they actually get to go home since starting their career with the club.

The 13-1 win over the Red Sox was a fitting way to end the extremely long road trip, and Ryu proved to be the perfect man for the job.

The Korean southpaw threw 87 pitches, allowing just two earned runs in six scoreless innings, lowering his ERA to 3.26 and proving he's finally got that errant changeup back under control. He threw five strikeouts without allowing a single walk.

While Ryu kept things locked down on the mound, the Blue Jays went to town at bat. The Toronto club hammered in 13 runs despite getting just one big fly, relying on good base running and the occasional extra base hit to get the job done.

Ryu heads to his new home with 10 wins and five loses with the season just past the halfway point, a 2.73 ERA for July suggesting he's heading into the home stretch on very good form.