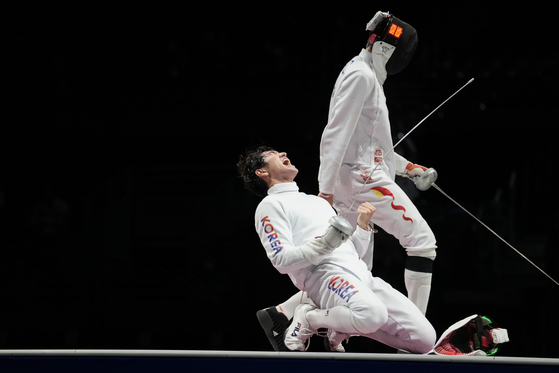 Park Sang-young celebrates after scoring his last point, winning the bronze medal match against China 45-42 on Friday at the Makuhari Messe Hall in Chiba, Japan. [AP/YONHAP]


The Korean men's épée team beat China on Friday to take the bronze medal at the Makuhari Messe Hall in Chiba, Japan, the first medal Korea has ever won in the event.

Korea beat China 45-42 in the bronze medal match. Kweon Young-jun and Park Sang-young were joined in the match by alternate fencer Song Jae-ho while Ma Se-geon watched on from the bench.

The bronze medal match was Korea’s closest match of the competition, as China repeatedly brought the score back to a tie.

Though Korea is the world No. 5 team and the China the No. 6, Friday's result was by no means a sure thing. Kweon, Park and Ma were all looking for redemption after dropping out of the individual tournament.

Kweon and Ma lost in the round of 32, while 2016 gold medalist Park reached the quarterfinals but failed to defend his title, losing to Gergely Siklosi of Hungary.

Park is known for his big comeback in the 2016 Rio Games gold medal match against Gaza Imre of Hungary, when he proved that fencing was a mental game. Park was losing 14-10, with Imre only needing one more point to take gold. During a short break, Park gave himself a pep talk on the sidelines, murmuring “I can do this,” after which he stepped up to the piste and did it — adding five straight points for a dramatic victory.

Five straight points in an épée bout is hard enough without it being the final of a gold medal match because in épée, double hits are allowed, unlike with the other two weapons, meaning that Park was able to hit but was skillful and bold enough to avoid being hit at the same time. 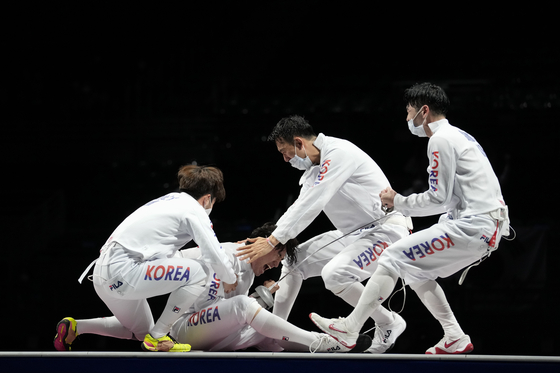 The Korean men's épée team celebrates after beating China on Friday to take the bronze medal at the Makuhari Messe Hall in Chiba, Japan. [AP/YONHAP]


At the Tokyo Games, Park repeated this past history but this time as a team. With the other three fencers unable to fully show their skills off, Korea’s strategy in the first two games against Switzerland and Japan seemed to be to have Park score as much as possible and the other two hold that lead for the full three minutes’ time limit.

But in the bronze medal match, Song and Kweon were able to prove that they were just as capable, as Song raised six points in his last bout to close the point difference and Kweon leveled the score at 34-34, handing over to Park to finish the job.

In team events, the last member has the biggest and most demanding job, shouldering the burden of making up for the team's deficits or trying to keep a surplus till the very end, while the opponent is also desperate to do the same.

But Park knew what he had to do. With a three-point lead, Park could have waited out the last eight seconds on the clock to end the match, but instead he fought on to the full 45 points, scoring eight points to China’s two to bring home his second Olympic medal and first team medal. 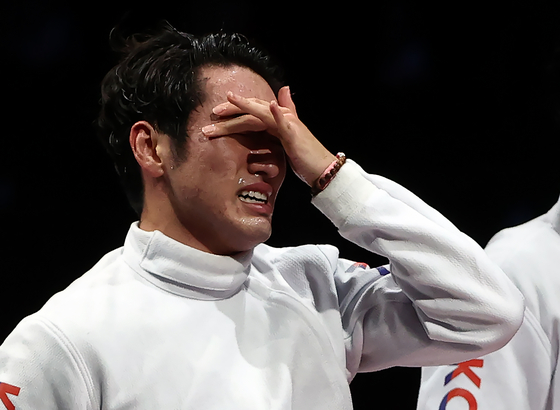 
Korea now has a total of five gold medals, three silver medals and six bronze medals in Olympic fencing. At the Tokyo Games, Korea has so far won four medals: Gold in men's team sabre, silver in women's team épée and bronze in both individual sabre and men's team épée.

Korea has one fencing event left, the women's team sabre event beginning at 11:25 a.m. on Saturday.