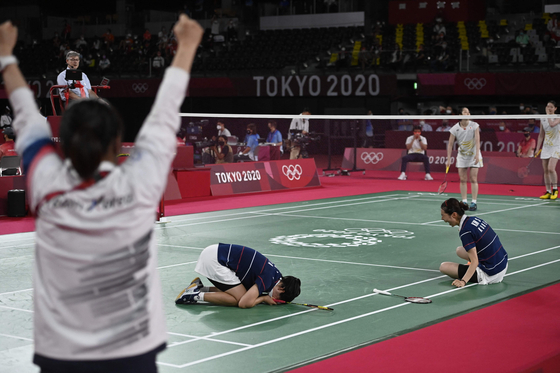 
Korea is guaranteed at least one medal in women's doubles badminton, with two teams having made it to the semifinals on the opposite side of the bracket.

At 5 p.m., Kim So-yeong and Kong Hee-yong, the No. 5 women's doubles pair in the world, bested Japan's world No. 2 Matsumoto Mayu and Nagahara Wakana in a test of endurance that lasted a whopping 73 minutes.

With the match score tied at 1-1, the final set went on for 34 minutes, with Korea ultimately prevailing 28 points to 26 thanks to two consecutive successful smashes from Kong. Both Kim and Kong fell to the ground, trembling, as soon as their win was secured.

At 6:30 p.m., world No. 4 pair Lee So-hee and Shin Seung-chan faced the Netherlands' world No. 17 Selena Piek and Cheryl Seinen. Lee and Shin had a comparatively easier time out, winning the first set with a 21-8 scoreline then going 21-17 in the second to end the match.

The semifinals, both of which are expected to be close matches, will take place on Saturday. Lee and Shin will play against Indonesia's world No.6 pair Greysia Polli and Apriyani Rahayu, while Kim and Kong will face off against China's world No.3 Chen Qing-chen and Jia Yi-fan.

Kim and Kong will be looking for revenge, as the duo lost 2-1 to Chen and Jia earlier in the tournament, in their third qualifier match in Group D, played Tuesday.

The medal decider matches will be played on Aug. 2nd.