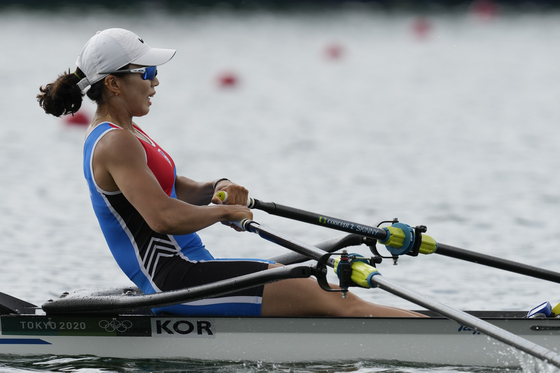 
Korea's sole rower Jeong Hye-jeong's journey at the 2020 Tokyo Olympics ended on Friday morning as she finished sixth in the D final of the women's single sculls tournament.

In Friday's race, held at the Sea Forest Waterway in Tokyo, Jeong managed to stay in fourth until the 1,000-meter mark, but then was overtaken by Puerto Rico's Veronica Toro Arana and Hong Kong's Wing Yan Winne Hung. She ended the match in last place.

"I just focused on what I had to do, thinking to myself that I shouldn't give up," Jeong said after the race, "because one day I'll make it. I want to be remembered as a competitor who always does her best."

Jeong has a sister three years her senior, Jeong Hye-ri, who is also a rower and inspired her to take up the sport. The two had hoped to compete in Tokyo together, but Hye-ri had to leave the national team due to injury earlier this year.

While she does leave without a medal, Jeong Hye-jeong still can walk proud as the only Korean rower to have participated in this year's Games. Korea has never been a strong rowing nation, and has yet to win an Olympic medal in the sport.

That Jeong reached the D final puts her solidly in the middle of the pack, avoiding the bottom two tiers of the competition.

Jeong making it to Tokyo by making it through the Asia and Oceania qualifiers — albeit just barely, thanks to Japan pulling out of the women's single sculls due to regulations limiting the number of rowing events a country can compete in — was in itself already a commendable achievement.