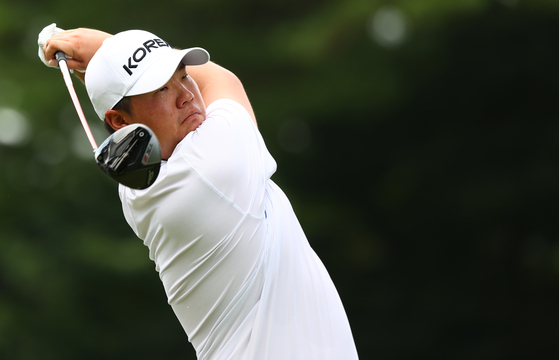 Korea's Im Sung-jae in action in the third round of the men's golf tournament at the 2020 Tokyo Olympics at Kasumigaseki Country Club in Kawagoe, Japan on Saturday. [REUTERS/YONHAP]


Korea's Im Sung-jae tied the course record in the third round of the Olympic men's golf tournament on Saturday, keeping a very slim hope alive that he could still climb his way up to a podium spot.

Im tied the course record with with 8-under, 63, at Kasumigaseki Country Club's East course in Kawagoe City, Japan, pushing him up to tie in 17th place on a total of 7-under, 206. That puts him five shots behind Paul Casey of Great Britain and Carlos Ortiz of Mexico in third place.

Im hit 10 birdies and two bogeys in the third round for 63, a dramatic improvement on his 70 and 73 in the first two rounds.

The Korean is the third person to hit the course record in the tournament so far, after Sepp Straka of Austria during the first round and Xander Schauffele of the United States, who currently holds first place, in the second round.

"Before I went out for the round, I told myself I will try to make 10 birdies today, and then I actually did it,” Im said. "So I think that I still have chance to win [a medal]. Today, I played as I had planned. I made birdies where I needed birdies, and I made putts where I needed to hole putts. That helped me finish with a good score.”

Im will need to pull out another spectacular round to make it to the podium. The men's golf tournament continues at 7:30 a.m. on Sunday. Im will tee off on the 10th hole at 10:57 a.m. alongside Kalle Sammoja of Finland and Wu Ashun of China.

Teammate Kim Si-woo, who is currently tied for 38th place, will tee off at 9:42 a.m. alongside Collin Morikawa and Patrick Reed, both of the United States.