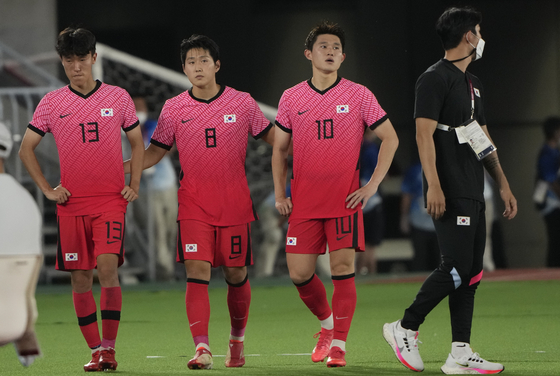 Korean players, from left, Kim Jin-ya, Lee Kang-in and Lee Dong-gyeong react after losing 6-3 to Mexico during a men's quarterfinal football match at the 2020 Tokyo Olympics on Saturday in Yokohama, Japan. [AP/YONHAP]


The Korean U-23 football team leaves the 2020 Tokyo Olympics empty-handed, losing 6-3 to old rivals Mexico in the quarterfinals on Saturday night.

Korea came out looking strong at International Stadium Yokohama in Yokohama, Japan, on Saturday, confidently controlling the ball for the first 10 minutes with a few shots on goal and two free kicks.

Things came undone in the 12th minute, when Mexico suddenly broke through with an early goal to take the score to 1-0. A well-placed cross across the box was headed back in to Mexican forward Henry Martín, who headed it straight into the back of the net.

That well-placed cross was an ominous sign of things to come — on many occasions throughout the game it was the accuracy of Mexico's passing that gave the North American side the edge.

But it was Korea that broke through next, with Lee Dong-gyeong picking up the ball just outside the box, beating the defender and firing the ball into the top right corner with his left foot.

Mexico responded 10 minutes later, firing a long cross from the halfway line to pick out Luis Romo on the edge of the box. Romo took one touch and then hammered the ball past goalkeeper Song Bum-keun to take back the lead.

Mexico's next goal could have been avoided. Korean defender Kang Yoon-seong was booked for pushing a Mexican forward in the box. The unnecessary foul gave the North American side a penalty and a subsequent 3-1 lead, leaving Korea with a serious mental game to play going into the break.

Whatever head coach Kim Hak-bum said at halftime seemed to work, at least for a bit. Lee scored Korea's second goal in the 51st minute, picking up the ball inside the box and beating the keeper to take the score to 3-2.

But just when Mexico was starting to look beatable, things started to unravel very quickly. Mexico scored a set piece with a header off a free kick in the 54th minute, very quickly adding a fifth goal in the 63rd minute with another well-placed pass to set up the play.

Now down 5-2, Korea's already weak offense continued to struggle, opting to pass the ball around the midfield rather than taking the opportunity to drive into the box and catch the defense unawares.

Mexico had no such qualms, adding a sixth goal in the 84th minute to take the score to 6-2. Korea were able to get one back in injury time — a Hwang Ui-jo header in the 91st minute — but the damage was done and Mexico already had an insurmountable lead.

Korea leaves the Olympics with some big questions to answer. The team started its tournament with a shock loss to New Zealand in their first group game, before rallying for two high-scoring wins over Romania and Honduras.

This year's quarterfinal finish repeats the disappointment of the 2016 Rio Games, when Korea also crashed out in the quarters despite having won the bronze medal at the 2012 London Games.

Korea and Mexico have plenty of history in Olympic football. At the 2004, 2012 and 2016 Games, the two teams were drawn in the same group. Korea won the games in 2004 and 2016, while the two sides drew in 2012. Mexico eventually went on to take the gold medal at that Olympics.

While Korea's tournament is now over, Mexico will advance to take on Brazil in the semifinals on Aug. 3. Japan and Spain will face off on the same day in the other semifinal.