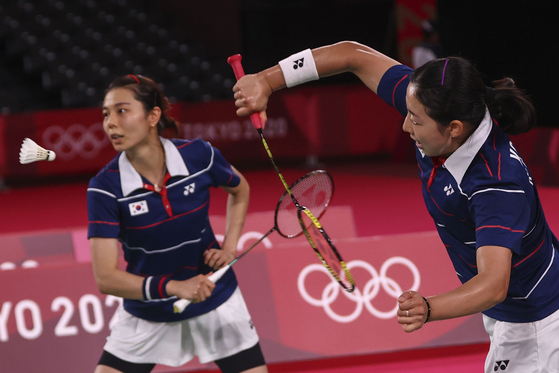 Kong Hee-yong and Kim So-yeong are in action in their match against China's Chen Qingchen and Jia Yifan. [REUTERS/YONHAP]


Korea are guaranteed a bronze medal in the badminton women's doubles event at the 2020 Tokyo Olympics, but which pair gets to take home the honor remains to be seen.

With two Korean pairs making it to the semifinals on the opposite side of the bracket, it was hoped that at least one team would make it to the finals, but such was not to be.

First to play were Lee So-hee and Shin Seung-chan, the No. 4 women's doubles pair in the world. They faced off against Indonesia's world No. 6 Greysia Polli and Apriyani Rahayu at Musashino Forest Sport Plaza, Chofu, western Tokyo, on Saturday 9:50 a.m.

The match was close, with the first set ending at 21-19 and the second at 21-17. Lee and Shin grabbed an early three-point lead in both games, but Polli and Rahayu pulled off a comeback in both.

At 11:30 a.m., world No. 5 Kim So-yeong and Kong Hee-yong went up against China's world No. 3 Chen Qing-chen and Jia Yi-fan. Kim and Kong were looking for revenge, having lost 2-1 against Chen and Jia earlier in the tournament, in their third qualifier match in Group D, played Tuesday.

Such plans went awry, however, with Chen and Jia dominating the match, finishing the first set with a 21-15 scoreline then closing it out 21-11 in the second.

The two Korean duos will compete for bronze on Aug. 2.