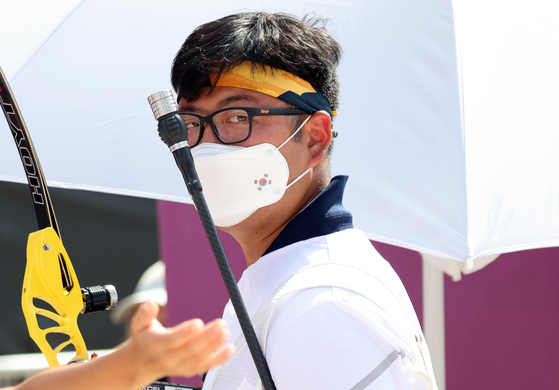 Kim Woo-jin leaves the field after losing to Taiwan's Tang Chih-chun in the quarterfinals of the men's individual archery competition. [YONHAP]


Korea archer Kim Woo-jin dropped out of the men's individual competition of the 2020 Tokyo Olympics following an upset loss against Taiwan's Tang Chih-chun in the quarterfinals.

At Yumenoshima Park Archery Field on Saturday afternoon, Tang, ranked 63rd in the world, eliminated Korea's chances of gold in the event by knocking out world No. 5 Kim in a close match that ended 6-4 in set points.

The game was tied at the end of the fourth set, and the victor was decided by the slimmest of margins in the final set, with Tang shooting 28 to Kim's 27.

Kim had started off his day in fantastic form, shooting nine straight 10s against Malaysia's Khairul Anuar Mohamad in the previous round played Saturday morning to advance to the quarterfinals.

It was hoped he could sustain his momentum throughout the day, but things did not go as planned.

Going into this year's Games, Korea's goal in archery was to repeat their performance at Rio 2016, in which the nation took home all medals up for grabs in the sport.

While Korea has failed to medal in the men's individual competition, the archery team still leaves Tokyo with four gold medals, equal to their harvest at Rio, by having won the inaugural mixed team event.