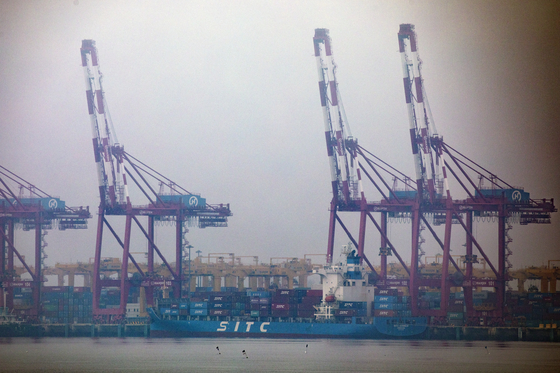 Cranes stand at the Incheon New Port in Incheon on Sunday. Korea recorded $55.4 billion in monthly export volume in July, the highest ever recorded thanks to countries worldwide economically recovering from the Covid-19 pandemic, the Ministry of Trade, Industry and Energy said on Sunday. [NEWS1]


Korea recorded $55.4 billion in monthly exports in July, the highest ever thanks to economies worldwide recovering from the Covid-19 pandemic, the Ministry of Trade, Industry and Energy said Sunday.

According to the ministry, exports last month increased 29.6 percent on year to reach $55.44 billion, the highest monthly figure to date since the ministry started tallying its exports in 1956. The previous record was from September 2017 with $55.1 billion, when the semiconductor industry enjoyed worldwide demand.

This year’s high figures were credited to the recovery of the global economy and the high performance of 15 key categories, 13 of which recording double-digit growth rates.

Traditional export champions such as semiconductors, petrochemicals, machines, automotive and computers, as well as growing industries such as biohealth, secondary batteries, agriculture and cosmetics, excelled. 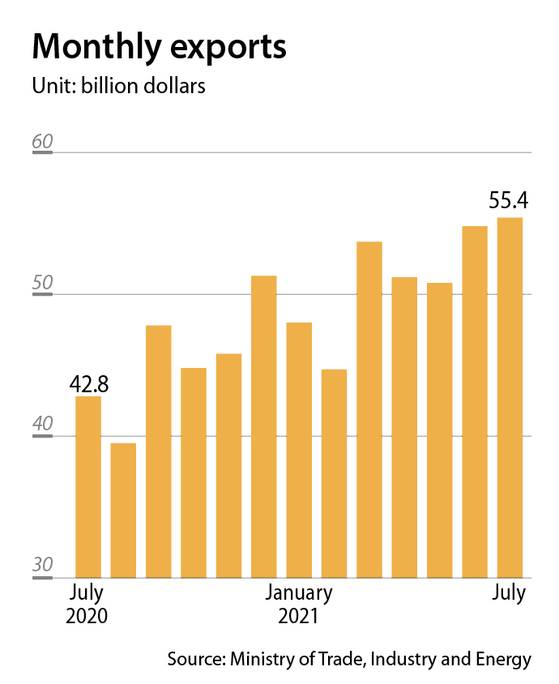 
Last month's operating days were 0.5 days shorter than in July 2020, putting the daily average of exports 32.2 percent higher than the previous year, with $2.26 billion.

The ministry forecast a positive outlook for the second half of 2021, citing international economic organizations such as the International Monetary Fund and the Organisation for Economic Co-operation and Development which both predicted international trade to grow this year.

The Bank of Korea also said they expect higher exports in the latter half due to “increasing semiconductor demand, economic policies and the economic recovery of key export countries” in a report published on June 16.

The ministry said that the third quarter is expected to perform even higher, citing the export business survey index released by the Korea International Trade Association (KITA) released on June 22. KITA’s export potential index for the third quarter was 113.5. An index value above 100 indicates exports are expected to grow from the previous quarter.

“The cost of key products such as semiconductors, petrochemicals, steel and display panels is expected to keep rising,” the ministry said.

Korea’s exports hit $303.2 billion in the first half of 2020, a record high. Complete with July’s results, Korea also recorded their highest exports during the January-to-July period with $358.7 billion.

If the trend continues, a full-year export record is possible, breaking the $600 billion of 2018.

In a statement in June, the ministry noted that exports are recovering faster than after any previous crisis, with all the ground lost won back in the last two quarters of 2020.