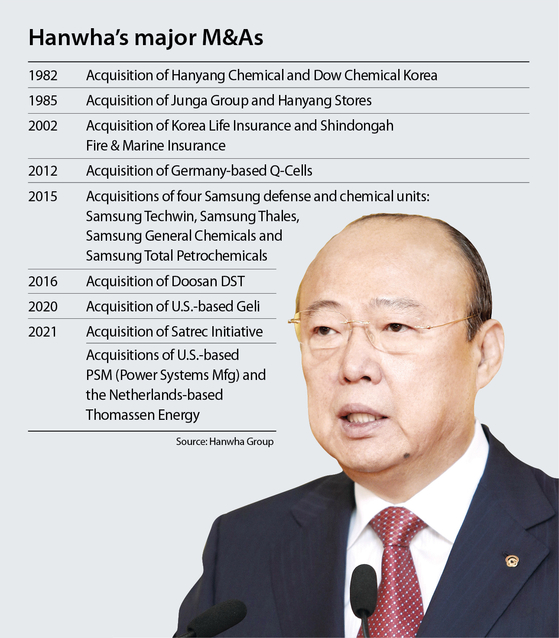 Kim Seung-youn, chairman of Hanwha Group, celebrated the 40th anniversary of his inauguration on Aug. 1.

A celebratory event was omitted due to Covid-19, but Kim will deliver a short speech through the company's in-house broadcast on Aug. 2.

“Hanwha’s growth and innovation for the past 40 years was possible because our Hanwha family was all together,” Kim said in a release Sunday.

“With a never-give-up spirit, let’s march toward becoming a 100-year-old company.”

Kim, born in 1952, took the helm of Hanwha Group in 1981 when the company’s businesses were largely focused on the defense and chemical industries. Its total assets were then 754.8 billion won ($655.7 million), and its revenue stood at 1.1 trillion won, ranking ninth among Korean conglomerates.

Under Kim’s leadership, the company continued to grow to now become the country's seventh largest company with 217 trillion won in total assets, posting a nearly 290-fold increase compared to when he first took office. 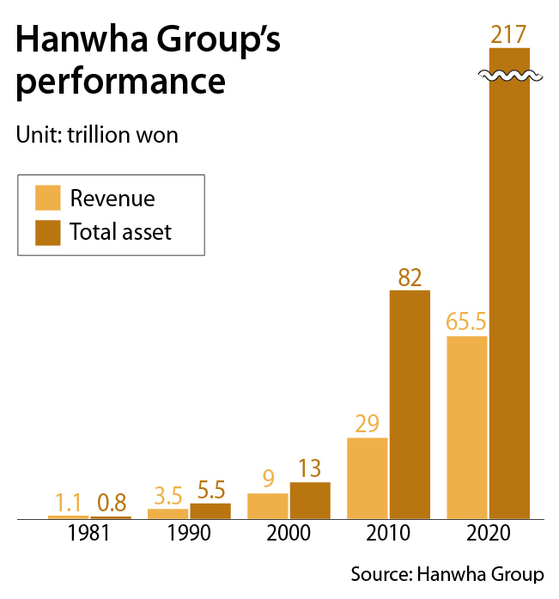 
Hanwha, which started as an explosive manufacturer in the ruins of the Korean War in the early 1950s, started to diversify its business portfolio when Kim came to the helm.

In 1982, right after being appointed as chairman, Kim pushed for acquisitions of Hanyang Chemical and Dow Chemical Korea which were in the red due to the aftermath of the oil shock.

“Company executives at the time opposed Kim’s plan of acquiring the two companies, but Kim insisted on the deal, saying the petrochemical industry’s future is not as bad and the global economy will rebound soon,” the company explained.

One year after the deal, the two companies returned to the black.

Hanwha’s next stop was in retail and finance businesses.

In 1985, Hanwha Group acquired Junga Group and Hanyang Stores which became what are today known as Hanwha Hotels & Resorts and Hanwha Galleria.

In 2002, Kim looked to acquire Korea Life Insurance, which was in severely bad shape at the time with an accumulated deficit of over 2 trillion won after the Asian financial crisis. Kim acquired the company regardless and turned the insurer to profit six years later. The total asset of Korea Life Insurance, which is today’s Hanwha Life, now stands at 127 trillion won.

The acquisition resulted in Hanwha Aerospace, Hanwha Defense and Hanwha Systems among others, propelling the group to the top of the country's defense industry and laying the groundwork for the group’s future growth engine in aerospace. 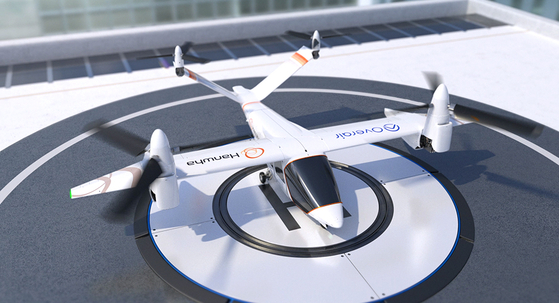 Promise for the future

Kim's core value in business lies in trust and loyalty, Hanwha explains, and that value will continue in Hanwha Group's new challenges in the future.

"Hanwha is going to be proactive in achieving net zero carbon emissions, as it is a promise made to future generations," Hanwha Group said. "Such a sense of mission is evident in Hanwha's aerospace business. It is an unwalked path and it doesn't promise short-term profit. But Hanwha has decided to go down this path for the future generations."

In partnership with KAIST, the team also announced 10 billion won worth of investment into research projects dedicated to intersatellite-link technology.

Hanwha says it will dig deeper into developing private spaceships and commercializing satellites.

Aerospace is not the only future-oriented business Hanwha is diving into.

In partnership with U.S.-based personal air vehicle developer Overair, Hanwha Systems is working to bring an urban air mobility service dubbed the Butterfly to the market in the near future. It plans to finish the research by 2024 and initiate a pilot run in 2025.

Through the acquisition of hydrogen technology companies PSM based in the U.S. and Thomassen Energy based in the Netherlands, Hanwha Group is also vying to take th lead in manufacturing and transporting green hydrogen.

groups revenue companys in group in

Questions about the civic group (KOR)

Questions about the civic group

Spy investigation goes no where