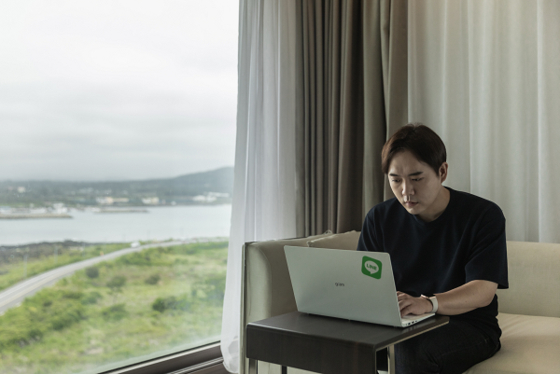 Hwang Jin-woo, a Line Plus employee, works from a hotel in Jeju Island. [LINE PLUS]


Working at home has been fun, productive and profitable for many Koreans, so much so that it might be difficult to drag people back to the office once the pandemic ends.

And some companies are leaning into the trend instead of fighting their stay-at-home employees.

Jobs are being done at luxury resorts and in cutting edge metaverse environments, while some particularly industrious types are taking the opportunity to squeeze in side gigs between conference calls and deadlines.

Hwang Jin-woo, a Line Plus employee, worked from a hotel on Jeju Island through June. His employer ran a new program in May and June paying hotel bills for 26 employees allowing them to work at vacation spots such as Jeju Island or Gangneung, Gangwon.

“Commuting to the office was the norm before the Covid-19 pandemic, but now it’s not,” said Hwang. “Whether I work on Jeju Island, at home, or at the office, it doesn’t matter.”

According to Hwang, saving the time he would use to commute to work — two hours every day — is another plus.

An office worker at a mid-sized firm works two days a week at home and uses the extra time to work as a web developer.

“It’s strenuous, but the money I get from my side job is larger than my paycheck,” he said. “It’s nice because I can freely communicate with colleagues at my side job when I’m working from home.”

With the two-month remote working vacation program well received, Line Plus implemented the "Hybrid Work 1.0" program in July. Hybrid work refers to a system in which employees can decide to fully work at home or choose days they want to come to the office, and all Line Plus employees can now plan their work schedules as they wish.

“Employees are very satisfied of our hybrid-work system, and we made a decision to continue with the program even after Covid-19,” said a spokesperson for Line Plus. 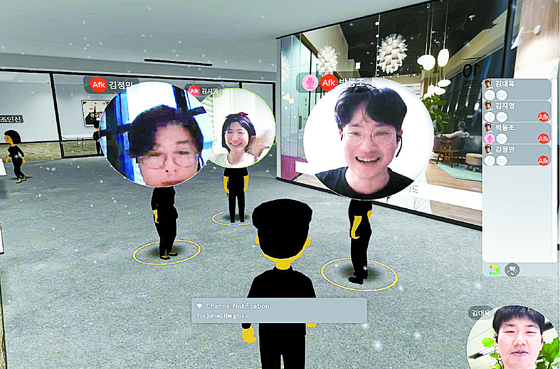 Zigbang's employees talk to each other at Metapolis, a metaverse office platform. [ZIGBANG]


Yanolja announced on June 30 that it will allow employees to continue with hybrid work after the pandemic.

With more people permanently working from home, the definition of a traditional company office is beginning to change.

Real estate listings site Zigbang moved out of its headquarters in Seocho District, southern Seoul, in June. Rather than moving into another office, the company now has employees working in a metaverse space named “Metapolis.” Employees can create their own avatars to roam the virtual office, video conference and chat with colleagues.

“We’ve implemented the 'cloud working system' since February, and closing our headquarters means that we’re going to continue remote work even when the pandemic ends,” said an official at Zigbang.

Although tech firms led the work environment transition, big companies are following suit. Some are establishing smart-work centers, also known as base offices.

In June, Hyundai Motors opened seven H-Work Stations in greater Seoul, including locations in Yongsan, Jongno, Anyang and Uiwang. Employees are free to choose whether to work at the office or at base offices near their home.

“Covid-19 is reshaping the working environment, and the new trend of working at smart-work centers is less likely to change even after the pandemic,” said a spokesperson for Hyundai Motors.

Reducing commute times and increasing work efficiency has left workers with extra time on their hands, and many have been making good use of it.

“I’ve been giving business consultations at skill sharing website Soomgo in order to meaningfully spend my extra time,” said a CEO for a local start-up. Soomgo is a website that matches users with experts, ranging from paid English tutors, freelance designers and personal gym trainers.

Others are spending time learning new things, even studying the stock market.

“I’m using the two hours I would have spent on commuting to work to study stocks,” said an office worker at an IT company in Seoul. “I think there are lot of people like me, because when I dropped by the office, everyone was talking about stock trading.”

When the Covid-19 pandemic is over, 65 percent of workers want to continue doing their jobs from home, according to a World Economic Forum (WEF) survey of 12,500 workers in 29 countries, including Korea. When asked what they would do if their employer orders them to work at the office full time after the pandemic, 30 percent replied they will consider looking for another job.

“Remote working created a workforce where employees are allowed to have side jobs,” said Lee Jang-hyuk, a professor teaching business at Korea University. “Companies that can’t accept the change may lose hard-working and talented professionals.”