A photo of the wall paintings outside a bookstore in Jongno District, central Seoul, which refer to rumors that Yoon Seok-youl's wife worked as a hostess at a nightlife establishment under the alias of Julie. On the right, the caption says, ″Julie's dream! Becoming the first lady!″ On the left, the center of the red heart reads, ″Julie's men.″ [NEWS1]


A firestorm of controversy surrounding a series of wall paintings referencing salacious rumors about the wife of former prosecutor general and conservative presidential frontrunner Yoon Seok-youl marred the candidate's Friday announcement that he will seek to run on the ticket of the main opposition People Power Party (PPP).

The paintings, which line the ground-level exterior wall of the Hong Gil-dong secondhand bookstore in Jongno District, central Seoul, attracted an angry crowd of supporters, and also detractors, of the former prosecutor general over the depiction of a blonde woman with a caption which read “Julie's dream! Becoming the first lady!” until the words were painted over on Friday morning by a store employee.

Unsubstantiated rumors circulating around the internet about Yoon’s wife Kim Keon-hee said she worked as a hostess under the alias of Julie at a nightlife establishment before marrying Yoon.

Another caption on the wall listed the names of seven high-profile men, including Yoon, Kim is rumored to have slept with.

According to a Hong Gil-dong bookstore employee who identified himself as the person who painted over the words on the painting, the paintings were commissioned by the store owner in April to brighten up the alley which runs along the building up to the entrance shortly after the store first opened.

The employee said the owner is declining all interview requests and is on a business trip outside Seoul. The employee also said that he did not know the owner’s reason for choosing the topic as the theme of the paintings.

However, shortly after their completion last week, the murals were aired in a news broadcast by TV Chosun and Channel A and began attracting the attention of conservative YouTubers, according to the employee.

On Thursday, a group of right-wing YouTubers and supporters of Yoon appeared in front of the bookstore, parking three cars in the alley directly in front of the paintings with the aim of blocking the view and blaring music through a loudspeaker in protest.

“I have been covering [the wall] with cars since yesterday because I hate looking at the paintings,” one of the protesters said. Conservative YouTubers also set up tripods in front of the paintings, recording the scene while voicing their umbrage to viewers.

Some of the conservative activists carried red umbrellas emblazoned with the words “fairness” and “common sense” — keywords which Yoon has used to call for a change of government.

The bookstore also received multiple calls from angry protesters objecting to the paintings.

However, the paintings also attracted progressive YouTubers, one of whom said, “Presidential candidates should undergo verification by the people.” Of the conservative activists blocking the view of the painting, he said, “This is clearly an illegal gathering of people aiming to prevent even photos of the paintings from being taken.”

The rancorous arguments outside over the paintings spilled over to affect the bookstore’s normal operations. “They threatened to bring people inside the shop,” the employee said.

No physical clashes between the bookstore staff and protesters have occurred, but police have been called on occasion to watch the area to prevent an outbreak of violence.

After the store employees made numerous calls to the police and the Jongno District Office over the loud arguments between people outside over the wall paintings and the cars parked in the alley, police and district workers arrived on the scene on Friday morning to demand the conservative activists remove their cars.

The store employee said the store owner told him to paint over the captions, which he did around 9:30 a.m. on Friday. However, someone had written them again in permanent black marker after lunchtime, prompting a second coverup with white paint and again with black spray paint. 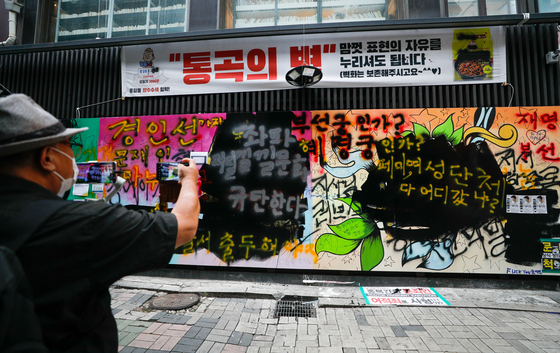 The same wall paintings by the end of the weekend, now covered in anti-government graffiti. [NEWS1]


While the wall paintings merely featured posters criticizing the bookstore and supporting Yoon on Friday, by Sunday the paintings were unrecognizable.

The face of the blonde woman had been completely covered in black paint, with the words “We denounce the political left” sprayed over it in silver paint.

The controversy has highlighted a debate over freedom of expression and the limits of political mudslinging.

While progressive voices on the scene said that the rumors deserved to be investigated, the words painted over the red heart which previously listed “Julie’s men” demanded, “Where are all the women’s rights groups now?”

Allegations surrounding Yoon’s wife and his mother-in-law, who was convicted of fraud and violating the Medical Service Act earlier this month, are attributed as reasons for a recent decline in polling ratings for the former prosecutor general.