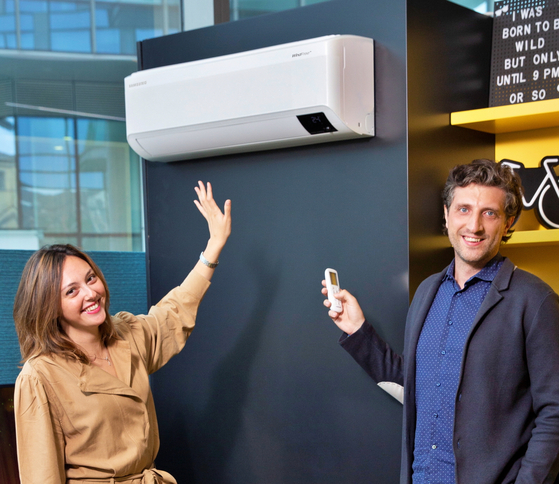 
The world has discovered Samsung Electronics’ wind-free air conditioners -- and it likes them.

And demand is only growing with heat waves and people staying at home due to the pandemic.

According to Samsung Electronics on Monday, global sales of the company’s wind-free air conditioners for homes in the first half of this year surged 75 percent compared to a year earlier.

That's particularly remarkable since their prices are at least double those of regular models.

The device was introduced in Korea in 2016. It offered a whole new cooling technology. Cool air is dispersed through 270,000 "micro air holes," which allows a room's temperature to be lowered without cold drafts from the machine.

The American Society of Heating, Refrigeration and Air-conditioning Engineers (Ashrae) defines “still air” as air currents at speeds below 0.15 meter per second.

Samsung claims its wind-free air conditioners have wind currents below 0.15 meter per second.

Samsung took the devices global in 2017, starting in Europe and Thailand.

Today they are sold in 80 countries and Samsung plans to expand that number to 90.

According to Samsung, wind-free air conditioners accounted for 40 percent of its home air conditioner sales in the first half of the year in both the North American and European markets, and 24 percent in Central and South America.

The Covid-19 has prompted many people to upgrade the environment in which they not only currently reside.

Wind-free mode saves up to 90 percent of energy consumed when the air conditioner is set to full blast.

The machines have also won global design awards including the iF Design Award and Good Design Award.

Samsung said it plans to increase its online marketing of its wind-free technology and offer online training in installation and maintenance for overseas dealers.

“While the wind-free air conditioner is already an ‘it’ item in Korea, it is being recognized overseas as a premium air conditioner thanks to its innovative quality,” said Lee Kang-hyeob, Samsung Electronics’ executive vice president.