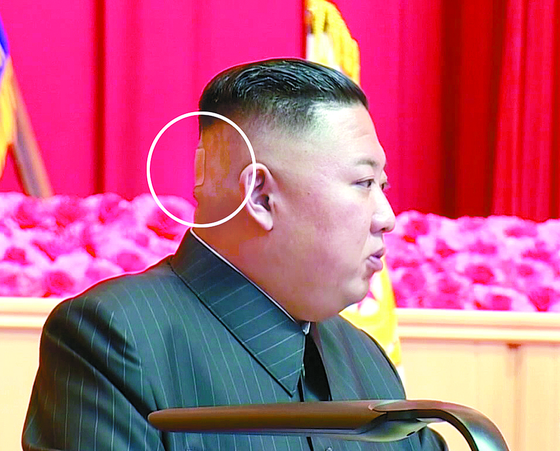 The flesh-colored bandage on the back of North Korean leader Kim Jong-un's head is visible as he speaks to senior military and party officials during a session which lasted four days from July 24 to 27. [KCNA]


Photographs showing a large bandage on the back of North Korean leader Kim Jong-un's head at an official meeting drew attention after they were released by the North's state news agency on Friday.

It is not confirmed whether the reason for attaching the flesh-colored patch was related to surgery or wounds caused by injury, resulting in various interpretations.

North Korea's ruling Workers' Party and state media released the photos on July 30, reporting that Chairman Kim presided over a lecture session for military commanders and political executives which lasted four days from July 24 to 27.

The meeting was held in Pyongyang and attended by commanders of the military, Workers’ Party Politburo members, the general political bureau of the People's Army and officials from the North's Defense Ministry. 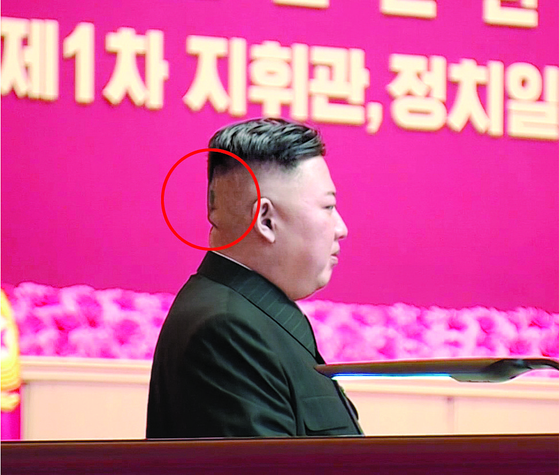 Another photograph of Kim's side profile shows a dark area where the bandage had previously been. [KCNA]


While the bandage was caught in one photograph of Kim’s side profile, another photograph showed the same area with only a dark spot, suggesting the bandage that had been removed originally covered a surgical incision or a wound of some kind.

However, neither the bandage nor the dark spot could be clearly seen on the back of Kim’s head during his visit to the Sino-Korean Friendship Tower the next day.

Some experts say the dressing on the back of Kim’s head was likely placed to cover the removal of a non-life-threatening condition, such as an abscess or lipoma.

One professor of infectious diseases, who spoke to the JoongAng Ilbo on the condition of anonymity, said, “Neither an infected pimple nor a lipoma poses a serious health risk.” He explained that lipoma can occur wherever an area of fat in the body grows to become tumorous for no particular reason, and that it can occur in various parts of the body, such as the arms or the legs.

He added, “You can usually leave lipomas as they are, but often people remove them for cosmetic reasons.”

Konkuk University Professor Oh Sang-woo, who specializes in family medicine, said, “It appears that he did not undergo a serious operation,” but cautioned that it was hard to glean any significant facts about Kim’s state of health from the presence of a bandage.

Since taking power in December 2011, following the sudden death of his father, Kim Jong Il, due to a heart attack, Kim has gained a large amount of weight. He is approximately 5 feet 7 inches tall and weighs over 300 pounds.

However, more recent photographs of Kim at official ceremonies have shown he has lost a noticeable amount of weight, prompting rumors about the state of his health and the intent of state media’s coverage in highlighting his slimmed-down appearance.

The health of the North’s leader is usually a taboo topic under the reclusive regime, leading observers to suggest that an official propaganda machine is attempting to show Kim as sharing in the food struggles of his people.

The bandage on the back of Kim’s head also recalls the efforts of his grandfather and North Korea’s founder, Kim Il Sung, to conceal a calcium deposit tumor which grew to the size of a baseball on the back of the elder Kim’s head in the latter years of his life before his death in 1994.