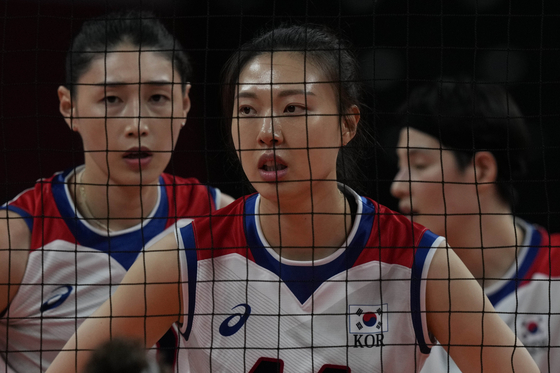 Korean players prepare for a serve during the women's volleyball preliminary round pool A match between Serbia and Korea at the 2020 Summer Olympics on Monday at the Ariake Arena in Tokyo. [AP/YONHAP]


The Korean women's volleyball team dropped its last preliminary match of the Tokyo Games against Serbia in straight sets at the Ariake Arena on Monday morning.

Serbia was the last opponent Korea had to face in pool A. Korea lost their first game to Brazil on July 25 but won against Kenya on July 27, then prevailed in the next two matches against the Dominican Republic and Japan.

This June, At the Volleyball Nations League in Rimini, Italy, Korea was able to defeat the outranked Serbian team after a hard fought two hours and 12 minutes. In Tokyo, Korea did not get a chance to lead the Serbian team, who had put together a stronger team for the big stage with world-class players like Tijana Boskovic. 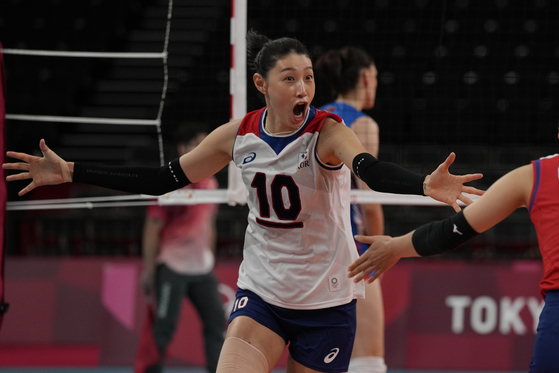 Kim Yeon-koung celebrates winning a point during the women's volleyball preliminary round pool A match between Serbia and Korea at the 2020 Summer Olympics on Monday at the Ariake Arena in Tokyo. [AP/YONHAP]


What Kim Yeon-koung does for Korea, Boskovic did for the Serbian side. Whenever they saw a chance, other players set the ball for Boskovic to spike into the Korean side of the court. Boskovic scored 13 points for the team and had the fastest serve, at 106 kilometers per hour. For Korea, Kim Yeon-koung had nine points and an even faster 121 kilometer-per-hour serve.

But the main issue wasn’t that Korea couldn’t cover the ace player, but that Korea was giving away points too easily, allowing Serbia 13 aces. Korea was also lacking digs, a defensive move that sees a player drop to the floor to prevent the ball from touching the court.

Despite opening the scoring in all three sets, Korea failed to grab on to that brief lead, and once Serbia started outscoring Korea they were unstoppable. The first set finished 25-18 in 22 minutes, the second set 25-17 in 27 minutes and the third 25-15 in 24 minutes. 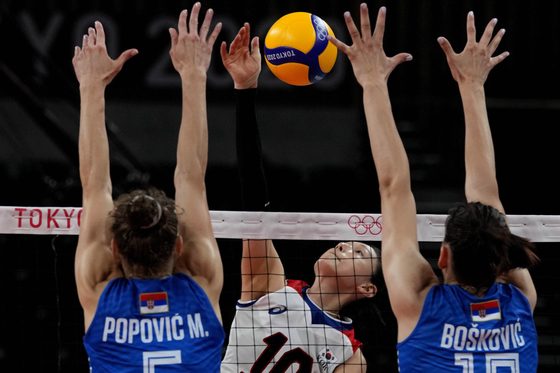 Kim Yeon-koung spikes the ball during the women's volleyball preliminary round pool A match between Serbia and Korea at the 2020 Summer Olympics on Monday at the Ariake Arena in Tokyo. [AP/YONHAP]


With key players like Kim Yeon-koung, Park Jeong-ah and Kim Hee-jin resting out the third set, Korea struggled to figure out the opponent until the very end, taking only an hour and 13 minutes to arrive at a final score of 75-50, or 3-0. Head coach Stefano Lavarini’s decision to rest the main players seemed to be because Korea had already secured its ticket to the quarterfinals, regardless of the result of this match.

With three wins and two losses, Korea sits at third in pool A with the top four countries advancing to the quarterfinals. The women’s quarterfinals will start and finish on Wednesday.