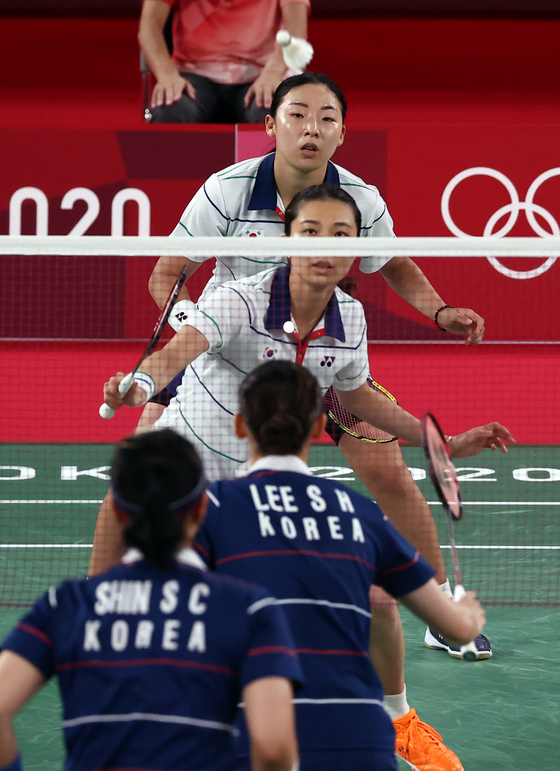 Kim So-yeong and Kong Hee-yong face off against Lee So-hee and Shin Seung-chan in the bronze medal decider of the badminton women's doubles competition. [YONHAP]

Kim and Kong, the No. 5 women's doubles pair in the world, claimed a 2-0 victory over world No. 4 Lee and Shin in a bittersweet match that took place at at Musashino Forest Sport Plaza, Chofu, western Tokyo, on Monday afternoon.

While the all-Korean bronze medal decider did mean guaranteed silverware for Korea, it was also an indicator that despite both reaching the semifinals, neither duo was able to make it to the gold medal match. The two pairs had made it to the semifinals on the opposite side of the bracket, and ideally could have met in the finals.

After losing a semifinals match to China's world No. 3 Chen Qingchen and Jia Yifan, Kim told reporters that it would have been more fun if the two Korean pairs could have faced off in the finals, saying it was a shame that they ended up clashing for bronze instead.

Lee, Shin, Kim and Kong all have long been members of the Korean national team, and were reported to have spent most of their time in Tokyo together. The match was an unfortunate family feud.

Kim and Kong established an early lead, setting the tone for the whole of the first set. Lee and Shin looked to be slightly overwhelmed by nerves, and Kim and Kong took advantage of their early momentum by smashing in five straight points at the end to complete a 21-10 romp.

The second set started off much better for Lee and Shin, with the duo establishing a 5-3 lead early on and extending it to 7-4 after a series of rallies. Kim and Kong were no pushovers, however, and displayed greater focus to close the gap and tie it 10-10.

The tense standoff continued, with the two pairs tying again and again at 13-13, 14-14, 15-15 — but then Kim and Kong grabbed back the momentum and plowed ahead all the way to match point.

With the scoreline at 20-16, Lee and Shin seemed to turn the tides again by recovering a single point, but Kim and Kong immediately bounced back to close the set 21-17 and secure their bronze medal.

It was Korea's only medal in badminton at this year's Games.

Badminton used to be one of Korea's better Summer Olympic sports in the 1990s and 2000s. From Barcelona 1992 to Beijing 2008, Korea took home six gold, seven silver and five bronze medals.

A long time has passed since the nation last struck gold in the competition, however. The most recent one dates back to 2008, in which Lee Yong-dae and Lee Hyo-jung won the mixed doubles event.

Since Beijing, Korea has won only three bronze medals — including the one that Kim and Kong won on Monday — over the last three Games.