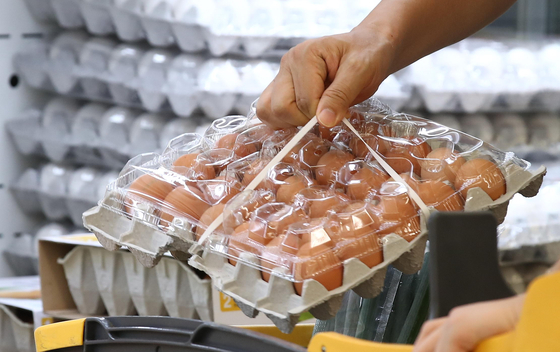 Eggs being bought at a discount mart in Seoul. Egg prices rose 57 percent, the highest rate in four years, in July. [YONHAP]

Consumer prices rose 2.6 percent in July compared to a year earlier, the fourth consecutive month they rose more than 2 percent.

According to Statistics Korea on Tuesday, rising international crude prices as well as spikes in agriculture and livestock prices boosted July’s figures. The statistics agency and government had earlier projected that consumer prices would ease in the second half of the year.

July was also the second consecutive month in which egg prices rose more than 50 percent.

Other foods that saw prices rise were garlic, which rose 45.9 percent, and red chili powder, 34.4 percent.

On Monday, Finance Minister Hong Nam-ki  said the government will put all its efforts into lowering consumer price, particularly eggs, as one of Korea’s biggest holidays, Chuseok, will be celebrated next month.

The government plans to import 100 million eggs in August and again in September.

The statistics agency said it hasn’t changed its view that consumer prices in the second half of the year will ease.

“It’s too early to say whether our projections were right or wrong as we haven’t gone through the entire second half,” said Eo Woon-sun, a statistics agency official. “Last month we projected that [consumer price growth] in the second half will show more stability when compared to the second quarter.”

He also noted that utility bills were higher than last year.