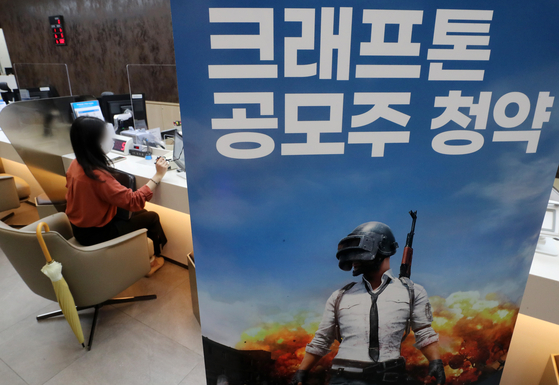 A retail investor subscribes to initial public offering shares of Krafton at a brokerage firm in downtown Seoul on Monday. [NEWS1]

Krafton’s initial public offering (IPO) has closed, and by some measures, it was a disappointing sale.


The offering was priced at the high end of the range, at 498,000 won ($434) per a share, and the company will start trading as the largest Kospi-listed gaming company, with a market capitalization of 24.4 trillion won. The 4.3 trillion won raised will be the second most ever, after Samsung Life Insurance’s 4.88-trillion-won IPO in 2010.

But demand was weaker than other issues in a market that has been hot lately.

The three underwriters in the deal — Mirae Asset Securities, NH Investment & Securities and Samsung Securities — took in a total of 5.04 trillion won during the two days of retail bookbuilding. It is significantly lower than the 58.3-trillion-won deposits taken in during the bookbuilding for KakaoBank last week, although subscriptions from multiple accounts was not allowed for the bank’s IPO.

Oversubscriptions and total deposits in and of themselves are not meaningful and are not good indications of future performance, but some Korean investors use them as rough measures of sentiment, and if those numbers are low, demand in the secondary market can be low as a result.

The expected market cap will make it the 15th largest Kospi-listed company, beating battery maker SK Innovation, which has a market cap of 23.9 trillion won, and right below LG Electronics, which has 25.6 trillion won of market cap.

NCSoft, currently the largest game maker, has market capitalization of 17.8 trillion, and it will likely be eclipsed by Krafton on opening day.

"Although Krafton's IPO allowed people to subscribe from multiple brokerage houses, its result has not met expectations as the recent heated debate over the valuation had an influence on retail investors," said Hwang Sei-woon, a research fellow at the Korea Capital Market Institute.

"But I don't agree with some saying the company failed marketing the IPO just because it attracted less in deposits than other big IPOs." Hwang said. "The oversubscription rate of 7.79 itself means that it sold well. It's more like investor interest in IPOs has dropped."

The company is fast growing and increasingly profitable, especially with the success of PlayerUnknown's Battlegrounds, an online multiplayer battle royale game first introduced in 2017.

Some 94 percent of its sales came from overseas, according to the company’s latest corporate filing.

“We consider the IPO meaningful because the company was able to inform the public about our creativity, technological prowess, and our efforts to step up to the challenges,” said Kim Chang-han, CEO of Krafton. “Krafton will endeavor to grow a global gaming company by releasing a new mobile game.”