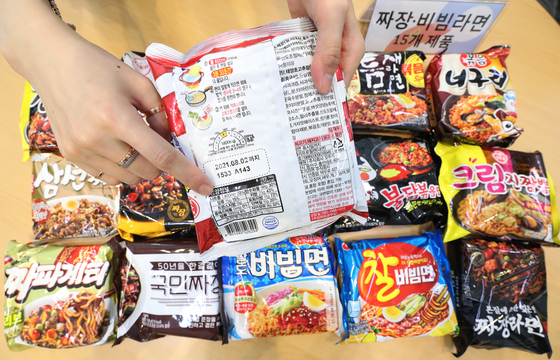 Jajang and bibim ramyeons that were tested by the Korea Consumer Agency on display at the government complex in Sejong on Tuesday. [YONHAP]

That tasty bowl of jajangmyeon or bibimmyeon has more than half your daily recommended intake of sodium and saturated fats.

In the world of ramyeon, they're not a healthy choice.

According to the Korea Consumer Agency on Tuesday, the instant versions of these noodles have on average 53 percent of the 15 grams of saturated fats recommended per day and 61 percent of the 2,000 milligrams of sodium recommended.

That’s more than a Big Mac.

If a person eats two per day, they have taken in all the sodium and saturated fats they should consume.

The study was made of 15 popular products.

The consumer agency noted that the saturated fat and sodium levels are higher in these products than in typical ramyeon because jajangmyeon and bibimmyeon do not have water content of other types of ramyeon.

The agency found in a survey of 1,000 people that 36 percent consumed more than one in a single meal.

Paldo’s Ilpoom Samseon Jjajang had the lowest sodium content, at 1,042 milligrams, and 7 grams of saturated fats

While Korea is not the world’s No.1 when it comes to total consumption of instant noodles, it ranks top in terms of per capita consumption.

According to the World Instant Noodles Association, as of 2019 China ranked top in terms of total instant noodle consumption, Indonesia ranked second and India was third.

Korea ranks No. 7 after Japan, Vietnam and the United States.

Ramyeon takes on the world, some boomeranging back to Korea

Ramyeon on the rise