Super cars, defined as those that cost more than 300 million won, had a super six months in Korea as revenge consumption extended to car purchases.

Their sales boomed as the car market as a whole struggled.

Sales of seven super car brands identified by the Korean Automobile Manufacturers Association (KAMA) jumped by 38.3 percent year-on-year in the first six months of this year, from 553 units to 765 units. 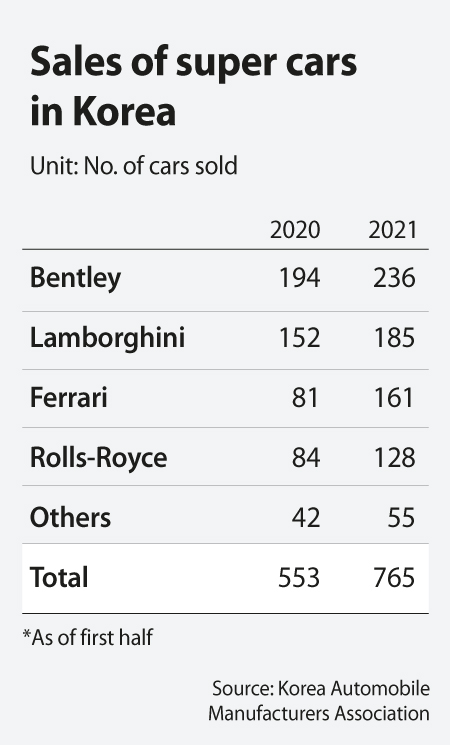 Bentley was the most popular super car brand, with 236 delivered during the cited period, followed by Lamborghini, at 185 units.

“Import car brands that cost over an average of 400 million won reported all-time high sales,” KAMA said in a report Tuesday. “Distinctive consumption patterns such as revenge consumption as a result of Covid-19 factored into the sales figures.”

Imported carmakers in general had a stellar first half, delivering 167,000 units, a 17.9 percent year-on-year jump. It is a half-year record, according to KAMA.

Their market share in Korea increased by 3.1 percentage points during the cited period to 18.1 percent.

Sales of Korean automakers plunged by 6.2 percent to 756,000 units, largely due to the weak performances of GM Korea, Renault Samsung Motors and SsangYong Motor.

Sales of Hyundai Motor and Kia, Korea’s two largest automaker, slipped by 1 percent and 0.8 percent, respectively. Sales of the other three Korean automakers in the first half dropped by 34.9 percent year-on-year.

“The fact that only imported carmakers are seeing a sales surge is something to be mulled over amid diversifying demand,” said Jung Man-ki, chairman of KAMA.

Sales of petrol and diesel-powered vehicles dropped by 7.5 percent and 14.1 percent respectively during the cited period.

The battle of the bees (KOR)