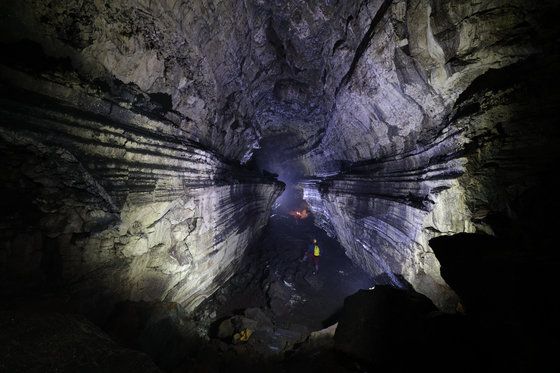 Manjanggul is the longest lava tube measuring 7.4 kilometers, and has the largest lava columns in the world. [JEJU WORLD NATURAL HERITAGE CENTER]

In an attempt to promote Korea’s Unesco-designated world heritage sites, the Cultural Heritage Administration launched an annual World Heritage Festival last year. Among 15 sites in Korea, the administration has selected four that will participate in this year’s festival. Baekje Historic Areas in Gongju and Iksan cities in South Chungcheong, that preserve the remains of Korea’s Baekje Kingdom, which lasted 700 years from 18 B.C. to 688 A.D., will be the first site that will kick start the festival on Aug. 13 until 29. Then the festival will travel to Andong in North Gyeongsang (Sept. 4 – 26), where the Historic Villages of Korea: Hahoe and Yangdong, as well as Byeongsan Seowon, one of the nine neo-Confucian academies of Korea that was designated in 2019, are located. Suwon City in Gyeonggi that is home to the large mountain fortress of Joseon Dynasty known as Namhansanseong will host the festival from Sept. 18 to Oct. 10, while Jeju Island will show off its famous Seongsan Ilchulbong tuff cone and the volcanic Mount Halla along with its lava tube system from Oct. 1 to 17. 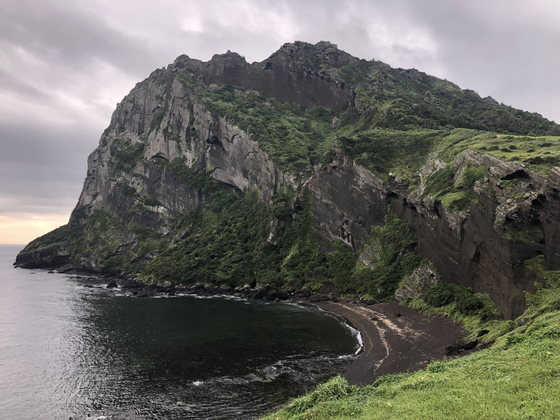 JEJU ISLAND — The date is still disputed but according to some researchers, between 8,000 and 200,000 years ago an immense volume of magma erupted from Jeju Island’s Geomunoreum, a volcano located in Jeju City.

The low velocity lava began oozing down the slope of the volcano and traveled northeast for about 14 kilometers (8.6 miles) until it finally came to a halt after reaching Woljeongri Beach. The lava with a temperature of about 1,000 degrees Celcius (1,832 Fahrenheit) was so destructive that nothing remained in its path.

However, from the destruction, a spectacular tube system was formed — a natural wonder so unique that it even became Korea’s first Unesco-designated natural world heritage. It remained the country's only natural world heritage until recently, when four getbol, or tidal flats in the southwestern region of the peninsula, were inscribed on July 26.

So far, 10 caves have been found, each one unique in its form, and eight of them are Unesco-designated as part of Jeju’s Geomunoreum Lava Tube System.

To promote the country’s world heritage sites not only to Koreans but also to the world, as well as to advance the understanding of their value and the need for proper conservation, the Cultural Heritage Administration (CHA) launched the World Heritage Festival last year. In 2007, “Jeju Volcanic Island and Lava Tubes,” which includes the natural reserve on Mount Halla, Seongsan Ilchulbong Tuff Cone and the Geomunoreum Lava Tube System, was inscribed on Unesco’s World Heritage list.

Jeju Island has been selected to showcase its natural wonders for the second year.

“After taking into consideration a lot of opinions from the public and experts from last year’s pilot event, we have made some tweaks here and there for the upcoming event,” said Kim Tae-wook, the general director of the festival.

This year’s festival in Jeju with the theme “Encounter,” kicks off on Oct. 1 and just like last year, some of the usually off-limit zones of Jeju’s Unesco-designated sites will be open for the public to experience for 17 days only. 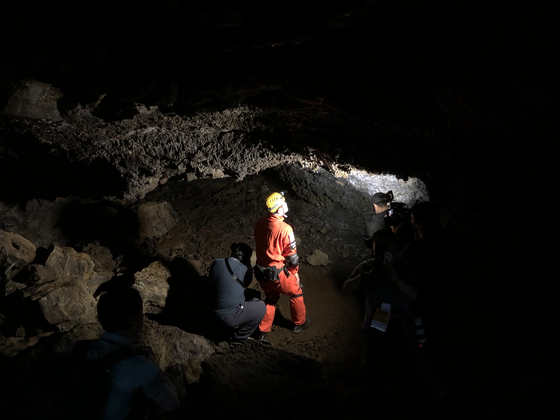 Bengdwigul is 4,481 meters long with complex passages, which is very rare throughout the world. [JEJU WORLD NATURAL HERITAGE CENTER]


Prior to its launch, the festival organizing committee in Jeju hosted a two-day media trip in July, allowing local reporters to experience what the upcoming festival has to offer.


Exploring the caves
Many people incorrectly believe that there’s only one cave on Jeju, which is Manjanggul. It’s the longest lava tube on the island, stretching 7.4 kilometers. The reason for that is because only one kilometer of it has been open to the public as a tourist attraction. 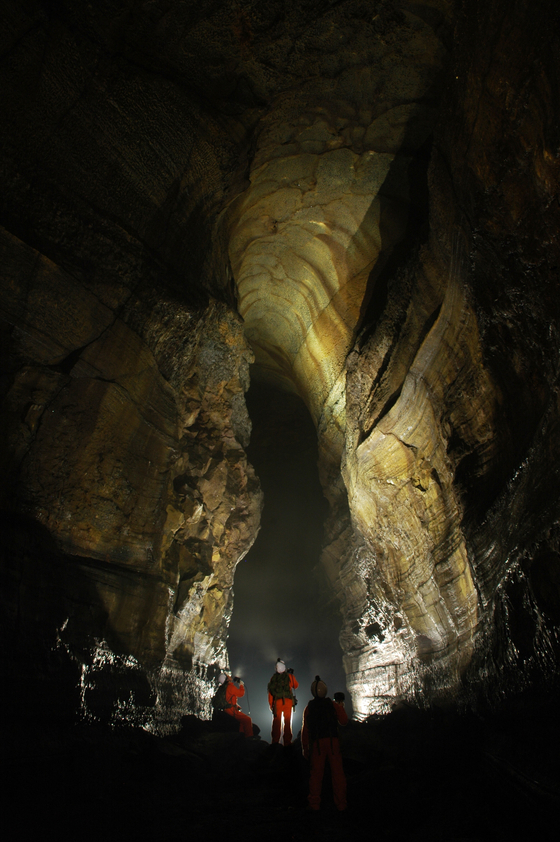 Gimnyeonggul is about 705 meters long and is highly valued due to its well-preserved internal morphologies, which help to better understand the formation processes. [JEJU WORLD NATURAL HERITAGE CENTER]

Even during the festival, the two caves are off limits for preservation reasons. They are known for their unique type of secondary mineral deposits. However, a virtual reality tour of the two caves will be available for those who sign up to walk the “Stone and New Life Trail” trail.

“Those lucky participants who get to explore all the caves can take this opportunity to compare different features of the caves,” said Ki Jin-seok, a researcher at the Jeju World Natural Heritage Center. “If you go inside Bengdwigul, you’ll instantly notice that it has a very complex passage structure.”

That’s because Bengdwigul was formed by stagnant countercurrent lava flowing through a low plain and spreading widely throughout the area. Therefore, the formation of the cave is not a pipe-like tunnel, as in a cave formed by lava flowing downward on a steep slope.

As Bengdwigul is close to the ground, the ceiling has collapsed at 23 points, creating not only 18 entrances, but also a “lava bridge.”

“In Manjanggul, you’ll see unique formations of the lava flow known as lava ropes. While in Gimnyeonggul, you’ll witness both characteristics of a lava tube and a limestone cave,” said Ki. “It’ll be an amazing experience to study the different marks the lava flow made in each cave.”


Walking trails
The walking tour program titled, “Walking Through Ten Thousand Years,” stretches 26.1 kilometers starting from Geomunoreum, the birthplace of the lava, to Woljeongri Beach, where it ended. This lengthy route that allows participants to walk in, on top of and near the lava tubes, has been divided into four courses so that people can choose those that are relevant to their abilities. 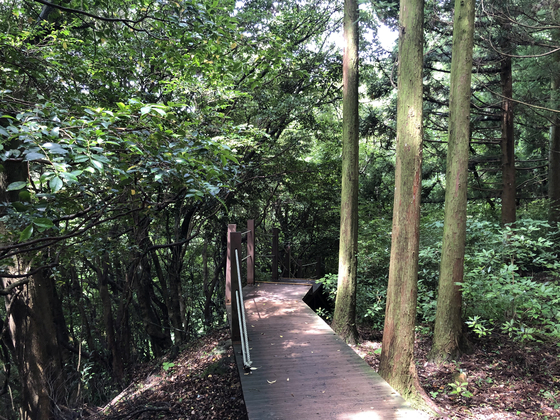 
Although the trails are open to anyone, free of charge, online reservations are a must to control the number of visitors for preservation and safety reasons.

The first course, named “Siwon Trail,” begins from Geomunoreum and stretches 5.5 kilometers. It’s a moderate course, leading participants on a walk through a forest of cedar trees.

Kim Sang-soo, chief of the walking trail program said the highlight of the first course is Geomunoreum’s crater.

“Researchers say the air is the cleanest here inside the Geomunoreum’s crater,” said Kim as he took a deep breath. “Usually visitors don’t come all the way down here as you have to join a group tour with a guide to access the crater and the number of visitors is strictly limited, but it’s really worth the trip.”

According to Kim, Geomunoreum was listed on Unesco’s World Heritage Site for its unique geology but it’s also a very important site botanically.

“Plants that grow in the valleys of the 1,000 or more hills of Mount Halla also grow here,” said Kim. “About 80 percent of the country’s ferns are on Jeju and you can see almost all of them here. It is indeed a rare place in the world as you can see more than 60 species just by walking along the trail of Geomunoreum.”

The easiest trail is the fourth course, “Stone and New Life Trail,” which stretches 6.5 kilometers. The course ends at Woljeongri Beach, where the lava came to a halt.

“The lava died here, turning into a great mass of basalt but it’s where people of Jeju settled down to start a new life by building houses using pieces of the basalt,” said Kim. 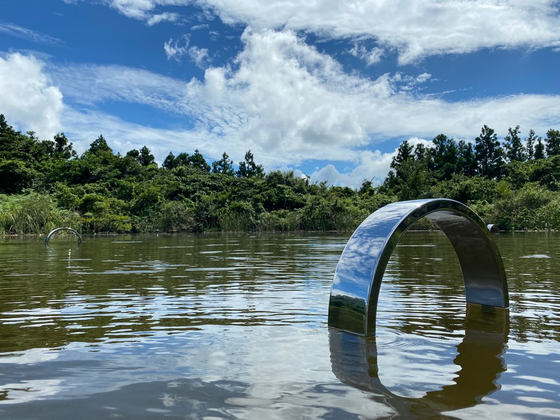 
To make the walking trail experience more special, festival director Kim said some spots will be used as a “canvas” for local artists to install their works. So far, 28 artists have been selected through a public competition to display their artworks inspired by the lava tube system.


For a chosen few
“We are proud to have Korea’s only Unesco-designated natural heritage. But at the same time, we wanted to take this opportunity to stress the importance of preserving our nature and looking after it,” said Kim. “Unlike cultural heritages, it’s very difficult to look after and preserve natural heritages. Of course we should still make efforts to preserve our cultural heritages; people can restore them when they wear out or become damaged. But with natural heritages, there’s no turning back once they are destroyed.”

That is why some of the special exploration programs are open to a set number of people who make it through a series of screening procedures including an interview.

For example, the “Pilgrimage to World Natural Heritage Sites” program which goes on for seven days from Oct. 10 to 16 is limited to 30 people.

After receiving online applications for both Koreans and foreigners, aged 19 and above, about 60 people will be selected to be interviewed, to find out if they have a passion for natural heritages, Jeju and the will to continue promoting the island's value and the importance of preservation. The organizers said the selected 30 will also have to be fit enough to camp out in the wild, climb Mount Halla, crawl through the caves, trek long hours and repel down ropes.

“There was one participant who showed great will and seemed physically fit [last year], but later during the program, showed signs of claustrophobia inside the cave and had to drop out from the team,” said Kim. 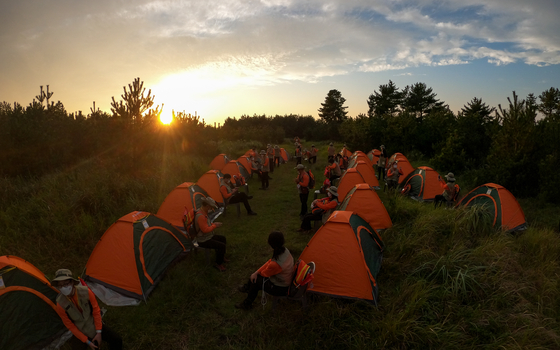 Last year's pilgrimage program participants got to camp out at the Seongsan Ilchulbong, which is usually prohibited [JEJU WORLD NATURAL HERITAGE CENTER]


From Oct 8 to 10, “Night Walking at Mount Halla Eoseungsaengak” will open for anyone aged above eight years old.

On top of Jeju’s Eoseungsaengak, which is a short hiking trail up a volcanic cone with views of Mount Halla, participants can enjoy a view of the stars, meditate and also enjoy an “unplugged sing along” concert. Online reservations are required and there’s a fee of 10,000 won ($8.70).

Reservations can be made via the festival’s website, worldheritage.kr. Reservation opening dates differ by program.

[Living Tradition] Culture in the metaverse