Four suspects enter the Cheongju District Court on Monday to attend a warrant hearing. They were suspected of organizing protests against the government's plan to procure stealth fighter jets after receiving orders from North Korea. [NEWS1]


The police on Monday detained three people for having executed orders from North Korea to organize public protests against the government’s plan to procure U.S.-built stealth fighter jets.

Judge Shin, however, rejected the police’s request to detain a fourth suspect, who runs an online media channel in Cheongju, North Chungcheong, for lack of legal grounds.

The four are suspects of a joint investigation by the police and the National Intelligence Service (NIS) which began earlier this year. The police and the NIS suspected that they had been in contact with agents of the Cultural Exchange Bureau of the North’s Workers’ Party and received orders to stage protests in the South.

The bureau, formerly known as the 255th bureau, is responsible for training agents to infiltrate the South and establish underground political parties focused on inciting unrest and revolution. Details of the suspects’ contacts with the North Korean agents were not immediately made public.

According to the sources informed about the investigation, the suspects received orders from the North to stage protests against the South Korean military’s plan to procure F-35A fighter jets.

From 2019 until last year, they led a civic group in Cheongju to oppose the procurement project. They also organized a series of signature drives, demonstrations and press conferences to protest the plan. 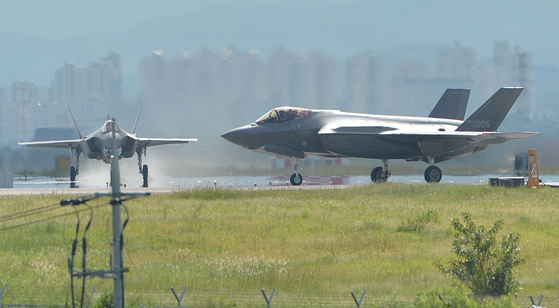 In this file photo, F-35 stealth fighter jets land at the Cheongju Air Base in North Chungcheong after a military drill on Aug. 31, 2020. [KIM SUNG-TAE]


In 2014, the government selected the F-35 Lighting II for the F-X III program. The Air Force is currently taking deliveries of 40 F-35A stealth aircrafts, and the delivery is scheduled to be completed by the end of this year.

The fighter jets are a key component of the South’s “Kill Chain” plan, a pre-emptive strike system against the North’s nuclear and missile facilities. The North has been strongly protesting the South’s plan to establish the Kill Chain.

According to the sources, the police and the NIS raided the suspects’ homes and offices in Cheongju in late May.

This year, the police and the NIS conducted five joint investigations into suspected National Security Act violations, the Cheongju case being one of them.