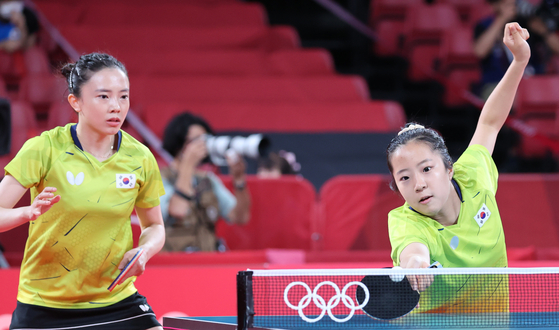 Jeon Ji-hee, left, and Shin Yu-bin compete in the table tennis women's team quarterfinals against Germany at the 2020 Tokyo Olympics on Tuesday. [YONHAP]


The Korean women's table team team narrowly lost to Germany in the quarterfinals at 2020 Tokyo Olympics, battling for nearly three hours in the 3-2 defeat.


In a tight opening match, Shin and Jeon doubled up to take on Shan and Solja, defeating the German pair 3-2 after a back-and-forth that lasted the best part of an hour.

Choi was unable to repeat her teammates' success in the first individual match, dropping three games in 25 minutes for the fastest match of the day. Facing off against Ying, the toughest member of the German squad, Choi was only able to score 14 points in the entire match.

Jeon redressed the balance in the third match, beating Solja 3-0 and overcoming deuce in the second game for a 13-11 win to put Korea back ahead 2-1.

Up next was teen ace Shin taking on the ferocious Han. The two fought for 45 minutes, but Shin was unable to edge out the more experienced opponent. Shin took one game, the second, breaking deuce for a 12-10 win, but ended up losing three others to tie the overall score at 2-2.

The final matchup saw Korea's Choi back at the table, taking on Shan. Choi put up more of a fight than in her first match, scoring a total of 23 points throughout the game, but Shan was just too strong, winning three games to take the game, the match and the overall contest.

While the women's team head home empty-handed, the Korean men's team is still in the competition and will face China in the semifinals at 2:30 p.m. on Wednesday.