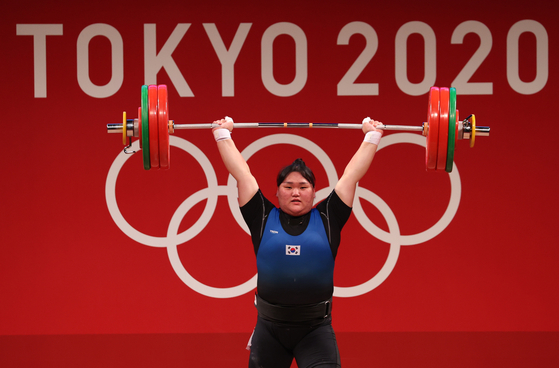 
Korean weightlifter Lee Seon-mi finished fourth in the women's +87 kilogram event on Monday evening at Tokyo International Forum, bringing her journey at the 2020 Tokyo Olympics to a close after narrowly missing out on a medal.

At this year's Games, Korean weightlifting had yet to medal in any event.

Considering how China's Li Wenwen all but secured the gold medal for herself early on by lifting 140 kilograms in her third snatch, setting a new Olympic record, only two medals were realistically up for grabs for most of the night.

Yet with Lee's final record of 125 kilograms in the snatch turning out to be the third best overall, the possibility of a silver or bronze medal started feeling very real.

In the clean and jerk, however, Lee could only manage to finish with a record of 152 kilograms after her third try of 155 kilograms went awry. It turned out to be not enough.

Great Britain's Emily Jade Campbell heaved 161 kilograms on her last clean and jerk, overcoming her lacking performance in the snatch (122 kilograms) and shooting to the top spot.

The United States' Sarah Elizabeth Robles, who came second in the snatch (128 kilograms), again performed slightly better than Lee in the clean and jerk as well (154 kilograms), finishing just one kilogram behind Campbell and five ahead of Lee.

Lee was holding onto third place when Li had not even started yet. Lee would not medal.

Li lifted 180 kilograms in her third clean and jerk, finishing at a whopping 37 kilograms above Campbell and securing the gold. The silver went to Campbell, and the bronze to Robles.