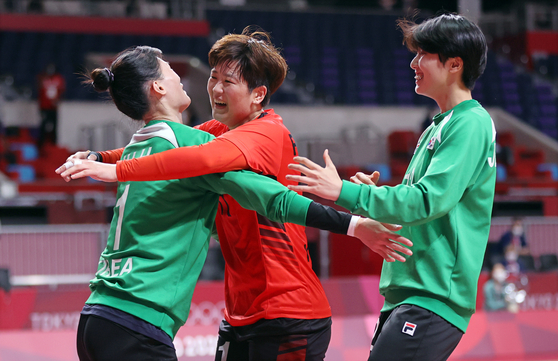 
Following Japan's 37-25 loss to Norway in the final match of Group A on Monday evening, the Korean women's handball team have advanced to the quarterfinals of the 2020 Tokyo Olympics.

Korea is now set to compete for a berth in the semifinals against Sweden, who advanced from Group B in first place.

The match is expected to be a tough one. Korea has been struggling for the majority of the tournament so far, and just barely got through the preliminaries in fourth place by virtue of edging out Angola in goal difference.

Apart from perhaps the match against Japan — which was Korea's only victory in the group stage — the team has never been in the driver's seat for any longer than a few minutes.

The other four games against Norway, the Netherlands, Montenegro and Angola primarily featured Korea valiantly attempting to stay in the game through sheer grit.

Sweden, on the other hand, coasted through their group with three wins, one draw and one loss.

That being said, all is not lost. Many believe Sweden may be a more beatable opponent compared to Norway or the Netherlands, both of whom Korea met in the group stage.

Sweden, in contrast, have yet to collect any serious silverware on the international stage. The team placed 7th in the 2019 World Championship, and 11th in the 2020 European Championship. Their best-ever placing in the Summer Olympics until now was a quarterfinals finish.

While Korea's overall performance at this year's Games so far has left much to be desired, the team did have some encouraging moments as well. If they can hit those highs once more on Wednesday evening, making the semifinals is not out of the question.

Right back Ryu Eun-hee will want to repeat her performance against Japan, in which she kept landing shots from nine meters out whenever Korea's attack lost steam. And if goalkeeper Ju Hui can stay as focused as she was in the final minutes of the game against Angola, in which she made two clutch saves to keep Korea's chances of advancing to the quarterfinals alive, there should be ample reason for hope.