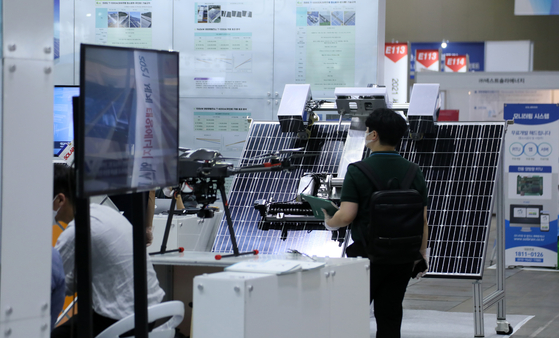 Solar panels on display at the International Solar Energy Expo and Conference held at Kintex in Goyang, Gyeonggi, in June. [YONHAP]

Solar panels generated 11.1 percent of electricity used during peak times last month, according to the Energy Ministry on Wednesday.

The government said the ratio of solar energy not only included that traded on the Korea Power Exchange but electricity that has been hidden to date, including that from Korea Electric Power Corp.’s (Kepco) power purchase agreements (PPA) and from private rooftop solar.

A PPA is a contract in which Kepco directly purchases electricity from energy suppliers without having to go through the exchange.
The electricity traded on the exchange is tracked real time, whereas PPA agreements and self-operated panels have not been.

When only accounting for electricity traded on the exchange, the ratio of solar power drops to 2.9 percent during the 2 p.m.-to-3 p.m. period.

The solar energy generated totaled 2,433 megawatts in July, whereas demand on the exchange was 83,479 megawatts.

As of July, the total capacity of solar panels generating electricity traded on the exchange was 5.1 gigawatts. Total capacity through PPAs was 11.5 gigawatts, while private solar-panel capacity was 3.7 gigawatts.

Through Korea Power Exchange’s app, the government will provide estimates on the daily and monthly supply of solar energy that isn’t tracked through the exchange to give a more accurate picture of the contribution of solar energy.

On July 27, President Moon Jae-in ordered the government to come up with measures that would show more accurate information on the contribution of solar panels to the nation’s electricity supply.

“Some of the electricity produced through solar energy has not been properly measured,” Moon said during the government meeting.

His comment followed reports that solar energy only accounted for 1.7 percent of the total supply between 4 and 5 p.m. based on the Korea Power Exchange results in July.

The government said while energy demand peaked at 4 and 5 p.m. at the exchange, when including demand outside of the exchange, the peak time moved to 2 p.m. and 3 p.m.

Moon’s energy policy, which is to raise the ratio of renewable energy to 20 percent by 2030, has been questioned, especially as the administration has pledged to phase out nuclear power, while doubts have been raised about whether carbon neutrality can be reached by 2050.

With the hot weather, power demand has surged, especially with people at home due to heightened social distancing measures.

In a move to provide stable energy in the face of possible blackouts, the government has pushed up the dates for turning on nuclear plants that were suspended for maintenance since early last month.

Solar energy’s dependence on weather showed up in the government report.