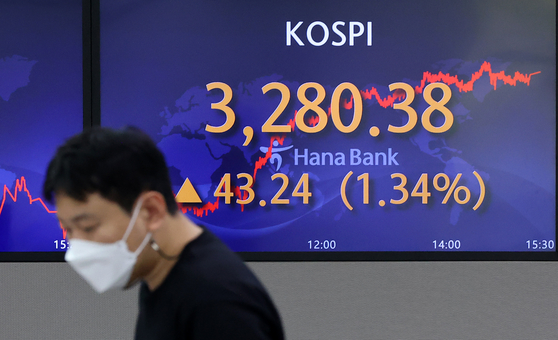 
Stocks rallied by more than 1 percent Wednesday, mostly led by strong tech gains. The won rose against the dollar.

The Kospi got off to a solid start, tracking overnight rallies on Wall Street over optimism for strong corporate earnings.

The S&P 500 gained 0.82 percent to close at a record high, with the Dow Jones Industrial Average and the tech-heavy Nasdaq composite advancing 0.8 percent and 0.55 percent, respectively.

The Kospi gained ground as major chipmakers continued to advance for the third day. Other tech heavyweights also rose on expectations of robust earnings.

SK Innovation slumped 3.75 percent to 243,500 won after the firm decided to spin off its battery business.

The local currency closed at 1,143.6 won against the dollar, down 4.7 from the previous session's close.