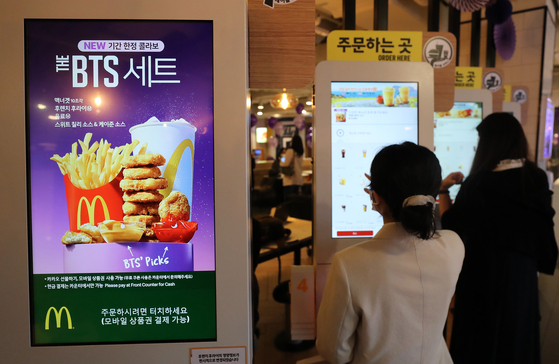 Customers order food from a kiosk at a McDonald’s store in Gangnam, southern Seoul, on May 27. [NEWS1]


McDonald’s Korea apologized on Wednesday after one of its stores was found to have used ingredients that passed their secondary shelf lives.

A secondary shelf life is the amount of time a product may be used after its packaging is opened. It's a system created by McDonald’s to keep its food fresh.

The secondary shelf life is usually shorter than the expiration date suggested by food manufacturers.

The McDonald's in question, which has not been identified, used hamburger buns and tortillas that should have been tossed.

The case was disclosed by an anonymous whistleblower, who released a video showing a package of hamburger buns with an expiration date sticker with one date on top of a sticker with an earlier date.

The video was made public Tuesday evening by KBS, a local media outlet.

In the video, the sticker on top showed the buns were good through 5 a.m. last Jan. 3. The sticker underneath had a different expiry time: 7:14 a.m. on Jan. 2.

“Newly printed [expiration date] stickers were usually put on top [of an old sticker] while [the store] prepared ingredients to use the next day,” said the whistleblower, according to a report from edaily, a local media outlet.

The whistleblower added that “part-timers were forced to obey orders because they were made by the managers.”

“Cases where expiration date stickers were reprinted and put on top were discovered, according to an internal investigation,” wrote the company in a statement. “We are sorry for the latest issue.”

The company added that it strengthened employee training and a system dictating the proper use of food ingredients.

McDonald’s Korea said that the specific incident was caused by a part-timer and that the person has been punished for the act.

But the practice occurred at other stores, reported KBS, citing former and current McDonald’s part-timers.

One of them complained, "Part-timers don't have the right or a reason to change" the sticker. It is usually a store manager or a sub-manager that gives such an order.


The case is being examined by the Anti-Corruption & Civil Rights Commission.

Its sales were up 9 percent to reach 791 billion won.

'Would you like fries with that?' rarely asked these days.