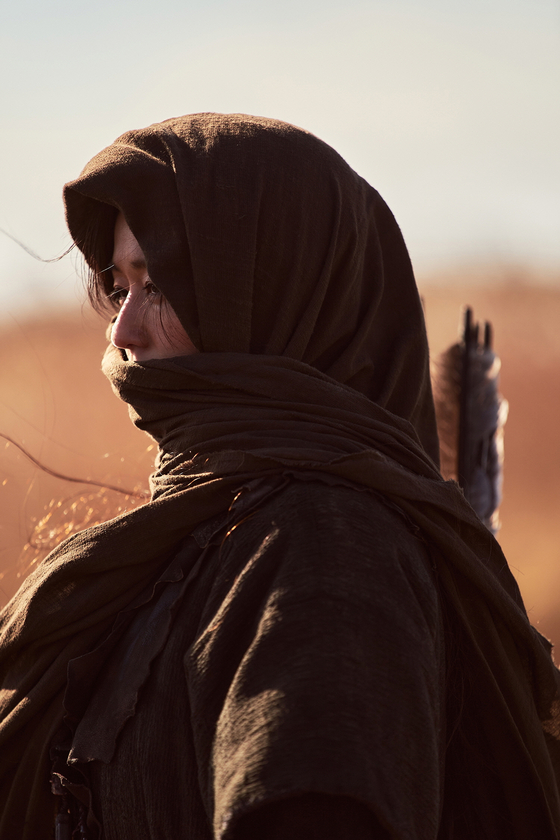 Actor Jun Ji-hyun as Ashin in Netflix's "Kingdom: Ashin of the North." She is one of the first characters to discover the usage of "saengsacho," the resurrection plant which can turn people into zombies. [NETFLIX]


The special episode of “Kingdom: Ashin of the North” released on July 23 offered fans of the Netflix series another step into writer Kim Eun-hee's world.

Anticipation had been high for months ahead of the episode's release, not only because of fans of the zombie series but also because it features hallyu, or Korean Wave, star Jun Ji-hyun, also known as Gianna Jun, as the main protagonist, Ashin.

Reviews of have been mixed with the special leading to even more questions about the origin and functions of "saengsacho," the resurrection plant which turns people into zombies, and how the relationships between newly introduced characters, mainly Ashin, Ai Da Gan (played by actor Koo Kyo-hwan), the leader of the Pajeowi (one of the powerful tribes of Jurchen) military, and the reappearing characters from the original “Kingdom” universe — Min Chi-rok (played by actor Park Byung-eun), the head of the Royal Commandery, the ex-Crown Prince of Joseon Lee Chang (played by Ju Ji-hoon) and physician’s assistant Seo-bi (played by Bae Doo-na) will play out.

Negative responses have mainly come from ardent fans who were disappointed with the length of the spin-off, but all in all most viewers have been satisfied with how Kim incorporated Ashin into her “Kingdom” universe as Joseon’s Hawk Eye/necromancer of saengsacho.

Last week, the Korea JoongAng Daily managed to glean some insight into the secrets of the resurrection plant and perhaps a preview of what's to come in the third season of “Kingdom” straight from Kim herself. The following are edited excerpts. 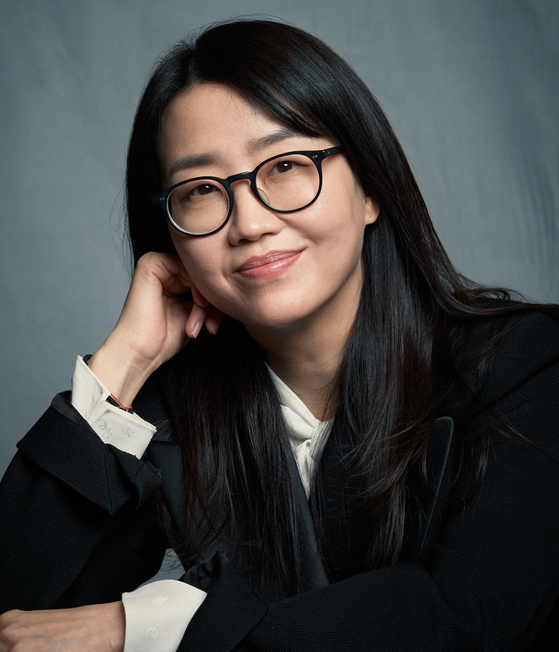 
Q. How did you think of the overall setting for this episode? What inspired you to explore the northern regions of Joseon from which the saengsacho derive?

A. Since the plant gravitates toward the cold I naturally came to think that it originated from the north, so I began my research there. While looking through Daedongyeojido [a 19th-century map of the Korean Peninsula by Korean geographer and cartographer Kim Jeong-ho in 1861], I discovered Pyesa-gun [a military hub established on the upper Amrok River to defend against Jurchen from the northwestern regions]. In the records, it said that it was completed during the reign of King Sejong (1397-1450) and abandoned during the reign of King Sejo (1417-68). The records didn’t specify the reason why it was abandoned — just citing difficulties of proper defense. And its name pops up again during the reign of King Sukjong (1661-1720) — there was an appeal suggesting that the king consider restoring the function of the military hub, but it remained in ruins. To be in ruins from the times of King Sejo to King Sukjong — that’s a long time, and I began to imagine if there was another underlying reason behind its demolishment. [For the narrative], someone might have discovered the secret behind the resurrection plant which grew in Pyesa-gun, which was why it was abandoned in the first place.

After I chose the region, I decided to include Seongjeoyain (deriving from the actual ethnic group from Jurchen which was under the protection of the Joseon Dynasty since King Sejong). The ethnic group actually lived near the Duman River but for the narrative of the story, I set them up near the Amrok River, where Pyesa-gun was located.

When I read about these Seongjeoyain, I was saddened by how they were treated. Just imagine, they were always looted by other northern tribes, which is why they accepted Joseon’s helping hand to live under their protection. But even though they lived under the rules of the Joseon for more than a century, they were always the minority, the outsiders who were never accepted into mainstream society. As I read about this group who belonged nowhere, I naturally thought about having someone from the tribe as the protagonist of my story. That’s how Ashin came to be.


Ashin discovered some of the secrets behind saengsacho from deciphering the paintings on the ruined walls of Pyesa-gun, but who initially drew the instructions remains unknown in the episode, while there seems to be more secrets about the plant waiting to be uncovered. Can you give us a little hint about how the plant will impact the “Kingdom” universe in the future?

Although this episode is an introduction to the character of Ashin, the region of Pyesa-gun also holds a great importance related to the many secrets behind the resurrection plant, which is also why the place imposes a threat. And remember, the parasite from the plant still remains in the bitten baby king from the second season, although its effects are yet to be manifested within him. So there are secrets within the palace. The secret behind the saengsacho is the plant hates the heat but why its effects become contagious when the heat is applied to the plant is all explained in Pyesa-gun, and I believe this place holds the crucial key about how to prevent or slow down the further spread of the disease. 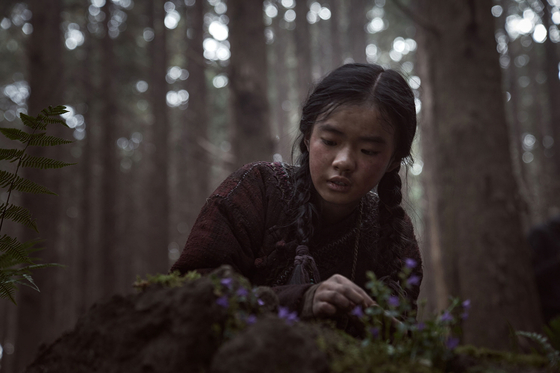 
So Ashin hasn't yet learned the secret behind the contagious element of the plant?

Yes, Ashin doesn’t know yet, and this factor will become a highly crucial factor to carry on the narrative for the third season. Very few have discovered the secret behind its contagious quality up until the second season. The zombie bite becomes contagious when people cook a bitten corpse in a soup and consume it.

The only people that Ashin willingly brought back from the dead were her tribe people [who were massacred by the Pajeowi] and she would have never thought to use the plant as a weapon until she discovered the real reason behind her people’s death. Due to the explosion of extreme fury and hate, she exacts revenge upon Min Chi-rok’s military camp, but she has yet to discover its contagiousness.

Director Kim Seong-hun showed me how he portrayed that scene [when Ashin plants saengsacho within the soldiers] when the first soldier-turned-zombie bites one of the two other soldiers, he dies. He doesn’t turn into a zombie, just like how the servant dies harmlessly after he was bitten by the former king at the beginning of the first season. Ashin just got her hands on a large cluster of the plant and created more zombies. So one of the highlights of the third season will be when Ashin finally gets her hands on Seo-bi’s journal [which contains all the secrets she discovered through her experience]. 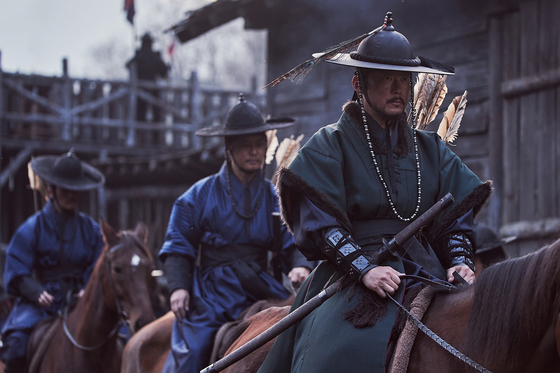 Min Chi-rok (played by actor Park Byung-eun), the head of his military camp on the far right, wrongfully blames the deaths of a group of Pajeowi men upon Seongjeoyain, leading Ashin to take revenge upon his troops. [NETFLIX] 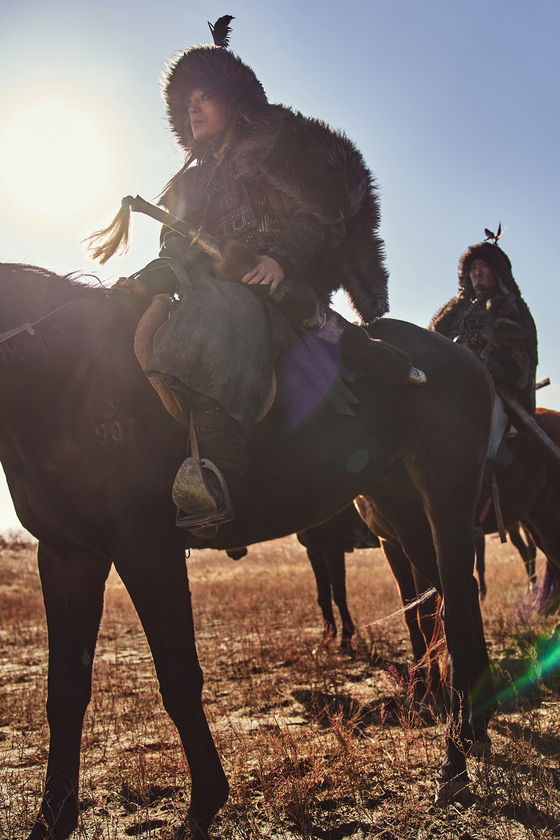 Ai Da Gan (played by actor Koo Kyo-hwan), the leader of the Pajeowi (one of the powerful tribes of Jurchen) military, brutally massacres Ashin's village believing they were responsible for the deaths of his men. [NETFLIX]


A lot of viewers say they felt betrayed by Min Chi-rok’s decision to turn Ashin's tribe over to the Pajeowi because he appeared to be a loyal and trustworthy servant of Lee Chang in the previous season.

As shown in the second season, Min Chi-rok is a fiercely loyal character who I believed would do anything for the sake of his country. In a way, I think his background is similar to that of Lord Ahn Hyeon (played by actor Huh Joon-ho). Ahn Hyeon was the model example of a flawless leader driven by his belief of Confucian values, but he agreed to sacrifice the minority for the greater good — in this case it was to save the country from Japanese invasion. So he spends the rest of his life burdened by his guilt, which is somehow alleviated when he sacrificed himself to help Lee Chang. What viewers could anticipate for the third season is seeing how Min Chi-rok’s guilt manifests in the story due to his betrayal.


Some commented on the lack of action scenes in which Ashin trains herself to become a master of archery.

I believe that Ashin continued to practice archery not because she wanted to train, but out of necessity. She promised her father when he left that she would take care of their family, which is why, after she turned her people into zombies after the massacre, she used her skills to feed them. Ashin doesn't realize until the end that the zombies crave fresh, human blood, and I believe she would have gone through a trial-and-error process to discover that. She was the sole survivor, the only person who can feed these people, so she had no choice but to continue shooting arrows for their survival.


The final scene of “Kingdom: Ashin of the North” left quite an impact as Ashin listlessly feeds her people live humans. What inspired you to come up with that ending?

Although there aren’t that many records left about Seongjeoyain, I sympathized with how lonely these people would have felt — to live without a sense of belonging or a proper identification of who they are. And if Ashin was the only one who survived, it means that there isn’t a single person left in this world whom she could talk to about her past. I think I naturally came to think of this scene as the I dove deeper into the solitude these people would’ve suffered. Truth to be told, this scene was the very first scene I thought of as I began to write the story for “Kingdom: Ashin of the North.” Sometimes there are stories in which the entire narrative of the story is structured around the climax of the scene — and in “Ashin,” it was this scene.


Can you tell us a little more about how Ashin will be joining the narrative of the third season?


In the third season, the pasts of Ashin and Ai Da Gan hugely impact the narrative, obviously. To be honest, I imagine a bigger epidemic — much more immense compared to the first two seasons — to take place in the next season. As the characters unite or clash to prevent the spread of the plague, Ashin will be at the center of them all.