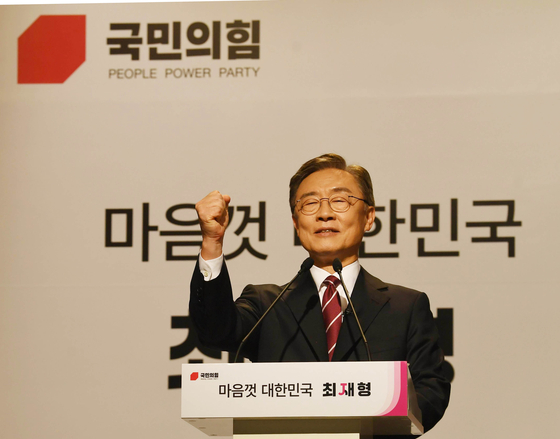 Former Board of Audit and Inspection Chairman Choe Jae-hyeong announces his presidential run on Wednesday in an online press conference. [YONHAP]


Choe Jae-hyeong, a former judge who headed the Moon Jae-in administration’s state audit agency until a month ago, formally announced Wednesday he will run in the March 2022 presidential election as a candidate of the main opposition party.

“I have decided to run for presidency because I cannot just sit back and watch the destruction of the Republic of Korea as a citizen of this country,” Choe said in an online press conference aired live from a studio in Paju, Gyeonggi.

Choe’s announcement came 32 days since he stepped down from the chairmanship of the Board of Audit and Inspection (BAI) on June 28. Moon appointed Choe to head the audit agency in January 2018. He had six months left in his four-year tenure when he quit the post.

Choe moved quickly to start his political career. He joined the conservative main opposition People Power Party (PPP) on July 15 and registered his presidential bid with the National Election Commission (NEC) on July 26.

“I seriously debated whether I should complete my term as the BAI chairman and protect my reputation or sacrifice myself for this country despite criticism,” Choe said. “And I chose my country.”

Choe said he did not hesitate to point out the wrongs of the current administration while he was heading the BAI. “No matter how important a presidential pledge is, I kept the principle that it must be implemented through a lawful process,” Choe said.

“When I audited the legitimacy of the early shutdown of the Wolsong-1 nuclear reactor, some ruling party lawmakers pressured me to step down and go into politics if I did not agree with the president’s philosophy,” Choe said. “But I did not step down. I thought performing my job as the BAI chairman based on law and principle was my way of loving this country.”

Ever since the BAI announced last year that the Moon administration shut down the country's second oldest nuclear reactor earlier than scheduled based on a faulty economic assessment report, the ruling Democratic Party (DP) attacked Choe and the BAI for trying to undermine the legitimacy of Moon's nuclear phase-out policy.

He, however, said he changed his mind and decided to run for presidency as he witnessed the current administration’s unlawful acts committed for its political purposes.

“I was not able to stop the destruction of the country’s fundamental system, attacks on liberal democracy and damages to the market economy,” Choe said. “Furthermore, I was unable to stop policies that are oblivious of the constitutional value of human dignity.”

Choe then presented a rough sketch of his visions, largely appealing to conservative voters.

He vowed to push forward reform and deregulation to offer good quality jobs to young people and stimulate corporate investments. “I will reshape the playing field controlled by labor unions and create a level playing field to offer fair job opportunities to the young,” he said.

In diplomacy, Choe said the Korea-U.S. alliance will be strengthened. He also promised to improve public education and the social safety network, vowing to appoint talented people to the cabinet and run the government transparently.

Choe, 64, studied law at Seoul National University. He passed the bar exam in 1981 and started his career as a judge in 1986. He left the judiciary in January 2018 after Moon appointed him to head the BAI.

He is the first head of the BAI to resign to become a politician. Former BAI chairmen Lee Hoi-chang and Kim Hwang-shik did enter politics — and Lee eventually made two unsuccessful runs for presidency — but they both served as prime minister after leaving the BAI and before becoming politicians.

After Choe announced his presidential run, he took questions from reporters in a video press conference. When asked why voters should support him over former Prosecutor General Yoon Seok-youl, Choe said he has a stronger ability to unite the country from the political division.

“While competing against Yoon, I will also work to accomplish our common goal of preventing the ruling party from another presidential win,” Choe said.

Yoon, former prosecutor general of the Moon administration, is Choe’s strongest rival within the PPP. Yoon stepped down from his post in March, four months before the end of his two-year tenure, in protest of Moon’s prosecutorial reforms.

On June 29, Yoon declared his presidential run and registered his candidacy with the NEC on July 12 as an independent. Last Friday, he joined the PPP to run in its presidential primary.

In a recent presidential poll conducted by Korea Society Opinion Institute (KSOI) on Friday and Saturday, Yoon remained as the frontrunner. He scored 32.3 percent, up by 5.4 percentage points from the previous week.

More information about the poll is available on the websites of the KSOI and the National Election Survey Deliberation Commission.