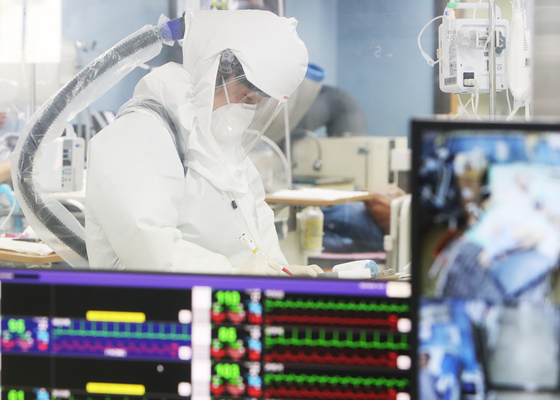 A medical professional in protective gear is working at a Covid-19 designated hospital at Bagae Hospital in Pyeongtaek, Gyeonggi, on Wednesday. [YONHAP]


The government will decide on Friday whether or not to adjust the current social distancing levels across the country, but confirmed that there will be no changes in the cap on gatherings.

"We will closely monitor the virus trends for one or two more days and then decide on the level of social distancing to be effective from next week during Friday’s meeting," Prime Minister Kim Boo-kyum said while chairing an interagency meeting on Covid-19 on Wednesday.

The government has imposed Level 4 in the greater Seoul area and Level 3 for the rest of the country. These levels have been in place since July 12 and July 27, respectively, until this coming Sunday.

All events and demonstrations are prohibited except for single-person protests.

The 10 p.m. business curfew for restaurants, bars and cafes remains in effect — however, clubs and bars that involve dancing have to shut completely.

Under the Level 3 rules, gatherings of more than four people are banned throughout the whole day, and only up to 49 people will be allowed at events.

Meanwhile, up to eight people can attend private gatherings under Level 2, and there is no cap at all under Level 1.

“Restrictions on private gatherings are a very important measure in the current distancing system in effect,” Sohn Young-rae, a senior epidemiological strategist at the government’s Central Disaster Management Headquarters, said during a briefing Wednesday.

“We have no plans to modify the overall measures on private gathering [limits],” Sohn added.

The senior health official’s remarks come after the prime minister said in a radio interview that allowing a gathering of only two people after 6 p.m. is “overly harsh” for the self-employed such as restaurant owners.

“The prime minister didn't say what he said to imply that there is a possibility of a change in the level,” Sohn said in an answer to a reporter’s question.

"He meant that because the hardships of small business owners are so great, we should try to curb the current virus trend as quickly as possible so such measures no longer have to be taken,” Sohn explained.

Korea added 1,725 new Covid-19 cases on Wednesday, sharply up from cases hovering in the 1,200s on Monday and Tuesday.

The accumulated caseload now comes to 203,926, according to the Korea Disease Control and Prevention Agency (KDCA).

There were two more virus deaths, raising the death toll to 2,106.

As Covid-19 cases are showing no signs of decreasing, the government may opt to supplement current distancing rules with additional restrictive measures.

“A number of opinions for revision have been made recently which reflect our current reality, and we’re looking for any other additional measures including covering issues raised by the media,” Sohn said.

The government is also reviewing the possibility of adding strengthened measures against the growing threat posed by the highly contagious Delta variant. The country reported two Delta Plus variant patients, of which some scientists warned may be even more transmissible.

Infectious disease specialists stressed the country should impose stricter distancing levels amid the continued high number of Covid-19 cases and the spread of variant strains in the community.

“It’s been about a month since the new distancing system has been implemented, but we are not seeing as much of a benefit as we expected,” Chun Eun-mi, a professor of respiratory medicine at Ewha Womans University Mokdong Hospital, told the Korea JoongAng Daily.

“Putting the country in lockdown would be best, but Korea has never done it and won’t implement it ever. … For now, shutting down [clubs and bars that allow dancing], as well as limiting multi-use public facilities is the best solution — allowing restaurants and cafes to serve only takeout and deliveries and limiting business hours to 9 p.m.,” Chun continued.

“Companies should be strongly recommended to switch to working from home,” Chun added.