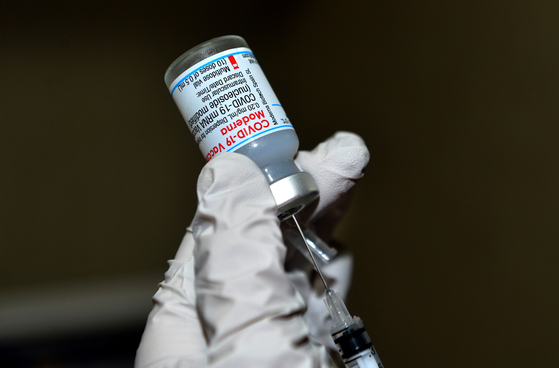 A vial of the Moderna Covid-19 vaccine. [KIM SUNG-TAE]


A 65-year-old man died nine days after receiving a Moderna Covid-19 vaccine, and health authorities are investigating any correlation between his death and the vaccine.

It is the first reported death involving a recipient of the Moderna vaccine in Korea.

According to the Gwangju Metropolitan Government, the deceased received his first dose of the Moderna vaccine on July 26.

That was the day that inoculations for people in their late 50s, as well as for people between 60 to 74 whose vaccine appointments got canceled, kicked off nationwide. They were Moderna inoculations outside the greater Seoul area and Pfizer inside.

Two to three days following the shot, the man developed a rash and visited a hospital.

He started suffering from a mild stomach ache and diarrhea, and then the stomach ache got worse. He was transported by ambulance to a general hospital in Buk District, Gwangju, early Tuesday morning.

He returned home after some treatment but his condition did not improve, the city said.

He was eventually hospitalized late Tuesday afternoon, but his symptoms got worse during night.

After he lost consciousness, he was taken to a university hospital, but died at 1:33 a.m. Wednesday.

Police and health authorities are investigating whether his death was related to the Moderna vaccine through an autopsy and analysis of whether he had any underlying disease.

According to the Korea Disease Control and Prevention Agency (KDCA), a total of 439 fatalities have been reported after vaccinations as of Tuesday.

Pfizer accounted for 251 deaths, followed by AstraZeneca with 181 and Johnson & Johnson’s Janssen with seven. Only two have been recognized as deaths directly caused by the vaccines.

Reported cases of post-vaccination side effects came to 121,565, or 0.46 percent of total inoculations.

Of them, 95.1 percent were found to be mild symptoms, such as muscle pain and fever.

The rate of adverse reactions per doses administered stands at 0.67 percent for AstraZeneca and Janssen, 0.34 percent for Moderna, and 0.26 percent for Pfizer, the KDCA said.

From Wednesday, reservations were opened up to people living in non-capital regions between the ages of 18 and 49 who are in priority groups defined by each local government.

Reservations will be available until 6 p.m. Thursday.

The priority groups include workers in essential services such as public transportation drivers, delivery workers and street cleaners; people who work in close contact with children such as hagwon (cram school) teachers; employees of high-risk facilities such as restaurants, noraebang (singing rooms) and PC bang (internet cafes); as well as people who may not have been well informed about the vaccination system, such as disabled people, foreign workers and international students.

Such essential workers living in Seoul, Gyeonggi and Incheon were eligible to make a reservation until 6 p.m. Wednesday.

Anyone who missed their chance to book a vaccine can try again from 8 p.m. Thursday to 6 p.m. Friday.

People who wish to make reservations can use the national vaccine registration website (ncvr.kdca.go.kr). They can also contact the KDCA's 1339 hotline or their local government’s call center.

Inoculations will take place from Aug. 17 through Nov. 11.